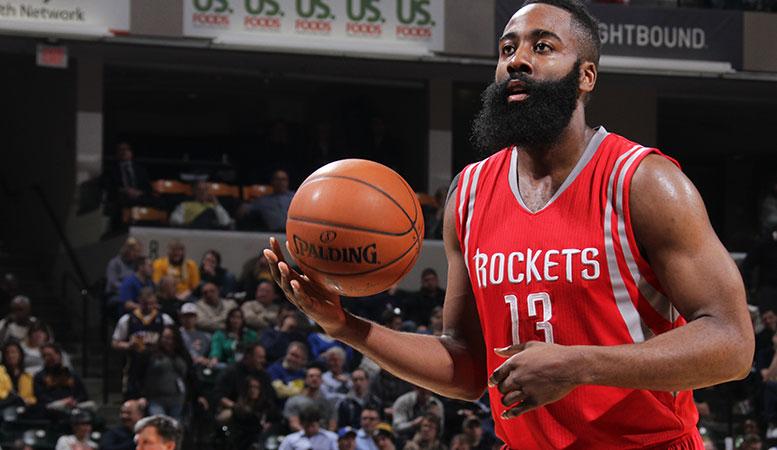 For the eighth time this season, James Harden reached the 40-point mark, giving the Indiana Pacers 44 in a 110-100 Monday night win in Indy.

Harden, as usual, did plenty of damage from the charity stripe, where he went 21-of-22.

Harden missed what would've set a new franchise record with 19 straight FTM in a single game. Settles for 19-20 FTM. pic.twitter.com/y7KLOVgPtP

As a team, the Pacers only attempted 19 free-throws, and have now lost six in a row.

Per the Houston Chronicle and Indy Star:

Indiana coach Frank Vogel said before the game that one of the team’s keys was to keep Harden off the line. Vogel wasn’t sure exactly how to limit his appearances at the stripe, though. […] “It’s near impossible,” Vogel said.

“Only guy I can remember who’s probably harder to officiate since I’ve been in the NBA has probably been Shaq,” David West said. “I don’t know if there’s been a guy who’s been able to draw the type of fouls that he does.”

“I’m going to give you a real answer, not a (B.S.) answer,” Roy Hibbert said, before offering his opinion on what has been ailing the defense. “I think that sometimes we take the easy way out. In the years past, we’ve been able to earn no calls and get stops,” Hibbert continued, “and I think the easier way out has been to foul, myself included. I haven’t done a good job guarding my own man and sometimes my help rotation is not as good as it has been. Sometimes we foul and that’s what’s leading the guys to shoot a lot of free throws.”