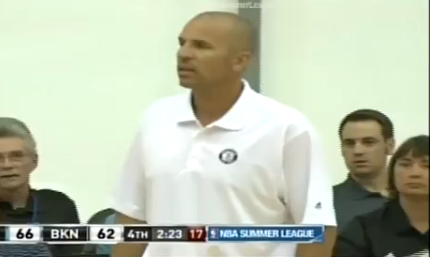 The Brooklyn Nets’ new head coach, Jason Kidd, earned himself a T in his first Summer League game. Kidd was rung up for leaving the coaches’ box in the fourth quarter of the Nets’ 76-67 loss to the Detroit Pistons on Sunday. Per the NY Post: “‘It’s a lesson learned,’ Kidd said, before adding with a smile, ‘and I know I can’t go past half court.’ It was the first lesson in what will have to be a steep learning curve for Kidd, who only retired from a brilliant 19-year Hall of Fame playing career a little more than a month ago, and is still understandably adjusting to his new role. ‘I’m learning,’ Kidd said. ‘As a coach, you’re going to learn every day from the good and bad. My job, come training camp, is to get settled with the guys we have on the team … every coach in this league, I think, learns every day from a game. Once you know everything as a coach, you tend to retire and do something else.’ He will also understandably lean on his lead assistant, Lawrence Frank, his former coach when he was a Net, as he did throughout yesterday’s game. Frank often was the one holding the clipboard during the coaching staff huddles during timeouts, with Kidd then usually delivering whatever message the coaching staff came up with to his players. On a couple of occasions, Frank himself drew up a play for the players to run. Kidd has said he will draw up his own plays, and attributed not doing it at times yesterday to the fact timeouts in summer league are 30 seconds shorter than during a regular-season NBA game. Point guard Tyshawn Taylor said the two coaches seemed to split the responsibilities in half. ‘Coach Frank is a mastermind when it comes to drawing up plays and things like that,’ said Taylor, who had 17 points and four rebounds. ‘I think Coach Kidd was talking to us mostly about defense, and when it came to the offensive stuff that we had to work on, Coach Frank would do it.'”