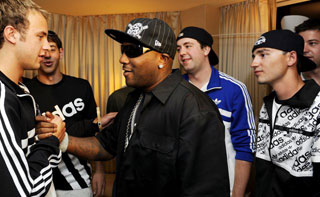 I’ve got a few things I want to go through here in what I’ll call sneaker closet-cleaning.

First up, a while back I posted about a Foot Locker/MTV/adidas social networking contest for Young Jeezy fans where the winner got to pick the city they’d like to see Jeezy in. In addition to the show, the person got to bring 10 friends along with them. Adidas sent this video over to us on the winner and how he spent his time in NYC recently.

Word has been spreading through numerous tubes of the interweb over the last few months of Jordan Brand’s plans to re-release/re-retro the Air Jordan XII. The nubuck/Carolina XII dropped at the end of May to surprisingly light fanfare. JB, I think, is headed in the right direction with the releases though. No gaudy colorways are on deck (yet, anyway) and what’s new looks hot. Take for example, this sunrise-themed XII, set to drop in October. The all-white look is a first for the XII, and if the name of the shoe hadn’t given it away to you already, it’s supposed to resemble a sunrise. As nice as the exterior of the shoe is, the insole might steal the show.

Pardon the pun—brace yourself, it’s a bad one—but I’ve had a sneaker, uh, sneak up on me recently. I’d seen the Nike Big on store shelves through the winter and didn’t bother slowing my roll in walking past them. It’s tough to get excited about every single thing the Swoosh releases that looks like a Dunk or Jordan I because you know, there’s so much of it. I got a pair of the Carolina blue/grey Bigs as a gift a while back though, and from the first wearing I was hooked. The shoe itself is simple enough. It’s comfortable, but there’s no breakthrough technology in them. But it’s that simplicity that’s killing me (note that I mean killing me in a good way, like how Kobe’s 60th and 61st points against the Knicks did, or like at the end of Zoolander when he finally hits them with Blue Steel). The shoes seem to go with everything. Beyond that, they’ve surprised the hell out of me as total neck-breakers. I can’t tell you how many double-takes I’ve gotten out of people when I’m out wearing them. I had a security guard at the Newark airport stop what she was doing and look up at me in the security clearing lineup thing to tell me she liked the shoes.

I don’t know about you guys, but this is how it always goes for me with sneakers that I get compliments on. The stuff that I buy that I think is fire might draw the odd compliment from a fellow head, but it’s usually the sneakers I get as gifts, the ones that I’d never usually buy on my own, that get the most attention.

Anyway, I’m so enamoured with the Big that I picked up a second pair of them a couple of weeks ago. These ones are red/black and bear a striking resemblance to the famous OG Jordan I. But the Bigs are more comfortable. That’s right, I said it. The Jordan I toebox is way too narrow for my liking.

To wrap up, I wanted to talk about branching out as a sneakerhead. When the shoeboxes initially started piling up in my room a few years back, it was a pretty steady split between Air Jordans and Air Force 1’s. My initial plan was to pick up all the Jordans I wanted (missing from the list are a pair or two of III’s, a pair of VII’s and a pair of XII’s…and maybe one more pair of XIII’s). From there I’d just load up on AF1’s for outdoor/casual wear.

Of course, the more I’ve read and learned about the sneaker world, the more stuff I’ve wanted on my feet. The AF1 drive died down somewhat for me in the last year. Enter Dunks, Weapons, shelltoes, some skate shoes and finally, Tigers.

My most recent pickup was a pair of red Asics Tigers, with white stripes. I’d been eyeing up the Tigers for a minute—actually almost a full year to the day, since my visit to their store in Paris last summer. Uma Thurman sparked interest in the shoe for me when she wore a yellow pair in Kill Bill Vol. 1. After wearing mine for a few weeks now, I can see why you would wear them for a fight against 88 deadly ninjas and one Tokyo underworld lord/former partner in murder-for-hire. They are the ULTIMATE shoe for creeping up on someone. I’ll probably never get to use them in a massive kung-fu scene in a Tarantino flick, but the obsession seed has been planted.