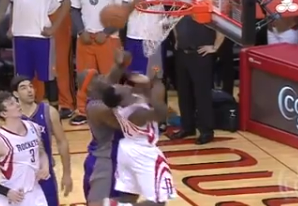 This amazing brain fart cost the Phoenix Suns the game—Jermaine O’Neal reached up into the hoop and knocked away James Harden’s last-second three. The refs were paying attention, and O’Neal’s gaffe helped the Houston Rockets clinch a Playoff spot. Per the Houston Chronicle: “The goaltending after the buzzer counted the basket, lifting the Rockets past the Suns 101-98, and with the Jazz loss to the Thunder, assured their return to the playoffs for the first time since 2008-09. ‘I actually didn’t think I would be excited,’ Jeremy Lin said. ‘I was like, ‘Oh yeah, we’re going for the six seed.’ Now that it’s really here, I’m actually really excited because no one really gave us a chance going into the season that we’d be in the playoffs.’ Out with a knee injury, Lin did not play in last season’s playoffs with the Knicks. Harden reached last season’s Finals, but after the trade that sent him to the Rockets days before the start of the regular season, he not only didn’t know if he’d return to the post-season, he didn’t know who would join him there. ‘I didn’t know who was on the team,’ Harden said. ‘I didn’t know what was going on. I was kind of still shocked. Weeks went by and a month went by, we kind of gained confidence in one another that we can go out and compete with anybody in this league. It’s been that way through this whole entire season, and now we’re in the playoffs.’ The oddity of how it became official could only make the breakthrough that had been expected more memorable.”