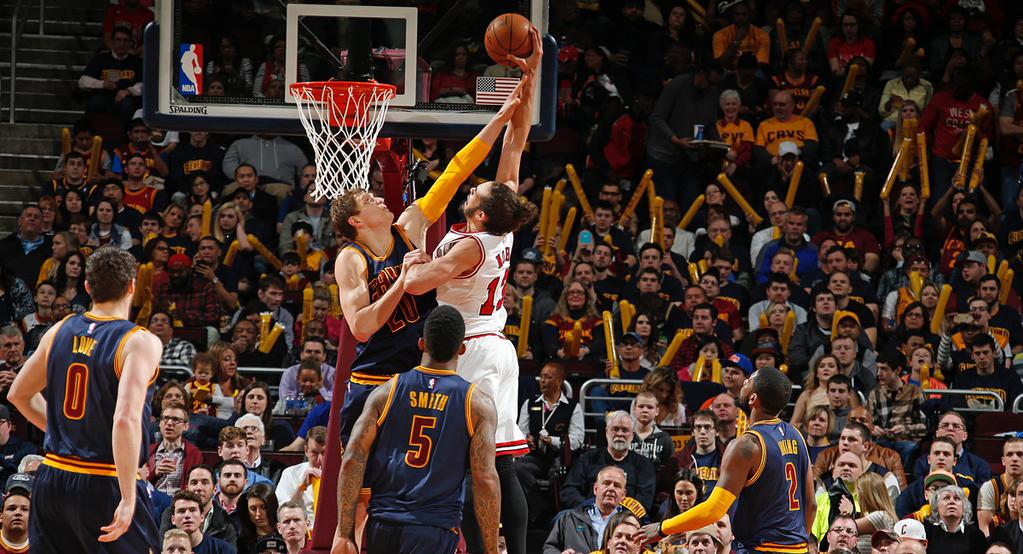 The Chicago Bulls may have lost 99-94 to the Cleveland Cavaliers, but their confidence and defiance remained high Sunday.

Joakim Noah got his revenge on Timofey Mozgov with a huge dunk, and says he’d love another shot at LeBron James and the Cavs in the postseason.

Derrick Rose told ABC during the nationally-televised affair that he expects to return to game action “likely sometime this week.”

The Bulls dropped to 10-10 without Rose in his latest absence to a knee injury, falling 99-94 as the Cavaliers won their 18th straight game at Quicken Loans Arena in a possible playoff preview. […] “It would be great to play them in the playoffs,” Joakim Noah said. “It would be very, very exciting. It’s something I really hope happens.”

Friday marks six weeks since (Rose’s minor right knee) surgery. The Bulls play at the Magic on Wednesday, at the Heat on Thursday and at home versus the 76ers on Saturday. […] “Everything has gone according to plan,” coach Tom Thibodeau said. “He’s got to keep taking the contact on and hopefully it will be soon. We’re watching. We’re talking. But he’s got to feel comfortable enough to play. We’re not going to play him the amount of minutes he was playing before he got injured. We’ve got to re-establish a baseline, something where he can get his feet wet and start moving forward. The next part of his rehab is to actually play in the games.”

Noah, who famously derided the city of Cleveland in the 2010 playoffs, offered a parting thought. […] “This is a great place to play basketball,” Noah said. “Other than that, there’s not much else to do. But when you get on that court, it’s a great place to play. That’s as much love as I’ll give to Cleveland.”