Joe Johnson Beats the Knicks With a Game-Winner (VIDEO) 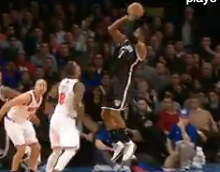 The Brooklyn Nets evened up the season series with the New York Knicks at 2-2 last night, thanks to a dagger from Joe Johnson. Knicks players were understandably salty after the game. Per the NY Daily News: ”It’s over,’ Carmelo Anthony said after Brooklyn rallied for an 88-85 win at the Garden on Martin Luther King Day. ‘We don’t see them anymore. It is the beginning of something that is going to be there for a long, long time. These games that we play against Brooklyn definitely are going to be tough hard battles.’ The Nets evened the season series at 2-2 when Joe Johnson hit the go-ahead jumper with 22.3 seconds left and when Anthony failed to strike iron from close range with Gerald Wallace’s hand in his face. Brooklyn’s first win at MSG improved the Nets’ record to 25-16 and moved them to within one game of the first-place Knicks (25-14) in the Atlantic. ‘Two and two against them stinks,’ J.R. Smith said. ‘It’s like kissing your sister.'”