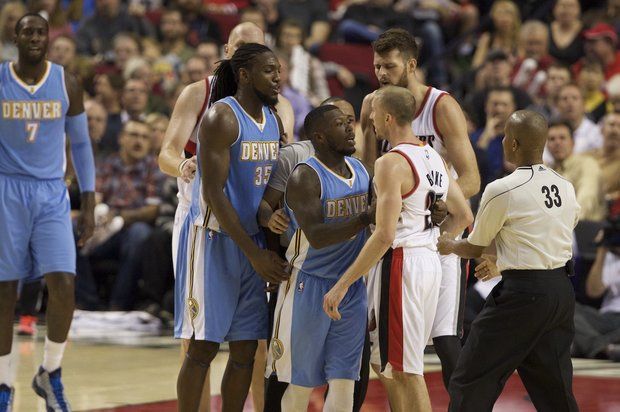 Portland Trail Blazers guard Steve Blake (who’s always ready to throw down) knocked the much bigger Kenneth Faried on his butt Sunday night, in the fourth quarter of the Blazers’ 116-110 win against the visiting Denver Nuggets.

Blake was upset with Faried for blindsiding him with a back screen.

The Nuggets big man admits that he dramatically fell down after Blake retaliated, resulting in a flagrant foul.

“That was a tough screen,” Blazers head coach Terry Stotts said. “I just quickly saw the replay, so I’m not sure if it was a dirty play. I just know that you can’t set a blind screen. You know, he was setting a screen, Steve didn’t see it coming, so I think it had more of an effect than maybe the intent.”

“He got mad I back-picked him,” Faried said of Blake. “I’m playing offense, I’m making sure my point guard got open, and he ran into the back pick trying to go to my point guard. Then he got mad about it and pushed me. Yeah, I fell down to make sure the ref saw it.”