Killer On The Loose! 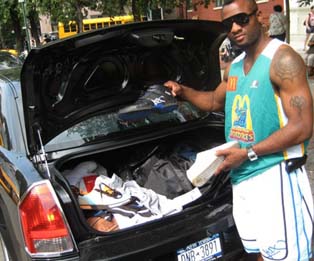 Say what you want about him, but Corey “Homicide” Williams is one of the few true playground legends left. He is the quintessential journeyman baller who earned his rep playing in New York City’s summer leagues and has turned it into a career, and now a sneaker endorsement deal. A dominant scorer and defender, what separates Homicide’s legacy from many other streetball stars is that he has officially been only a single dribble away from the NBA more than once.

A native of The Bronx, Homicide has had NBA several tryouts, workouts and summer league stints with the Toronto Raptors, Denver Nuggets, Indiana Pacers and most recently with the Golden State Warriors. He won a championship in the D-League in 2006-2007 and led the CBA in assists in 2005-2006. Holding a Jamaican passport has made it easier for Homicide to play overseas in places like China, Croatia, Germany and France.

While working overseas, he simultaneously became one of the most noted and dominant streetball players in New York City. He’s had neo-classic battles with Ron Artest , Alimoe and Allan Ray. But don’t take our word for it – he’ll be happy to tell you all about it himself.

Currently running with the Townsville Crocodiles of Australia’s National Basketball League, Homicide signed with K1X a couple of years back and finally released his very own signature “187” kicks this summer. The K1X 187 shoes are currently available in Footlockers all over the world.

SLAM caught up with Homicide just as his shoes were set free.