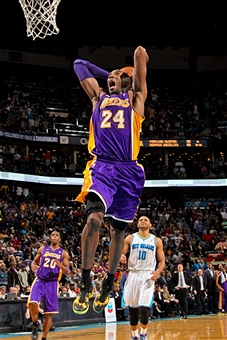 The Los Angeles Lakers staged a furious comeback in New Orleans last night—at one point they were down by as many as 25 points. Kobe Bryant (42 points, 12 assists and 7 rebounds) led the way, and got big-time help from Dwight Howard (20 points, 15 rebounds) and a red-hot Jodie Meeks (19 points) off the bench. Per the LA Times: “The Lakers might have finally found something in their goofiest twist yet, their largest comeback since 2002 with a 108-102 victory Wednesday at New Orleans Arena. All it took was a 20-0 run to end the game, amid 12 consecutive missed Hornets shots and five New Orleans turnovers in the final six minutes. Yes, it was against the woeful Hornets, but had there been a happier Lakers locker room all season? Doubtful. Did it get even more cheerful with many, many eyes watching a locker-room TV for the climax of the Houston-Dallas game? Absolutely. Somewhere, Utah wasn’t smiling, its lead over the Lakers down to 11/2 games for the West’s eighth and final playoff spot. Seventh-place Houston is now only two games ahead of the Lakers (31-31). In a development that would make the West’s upper crust shift a bit in comfy playoff-bound chairs, Kobe Bryant and Dwight Howard looked formidable at the same time. It took 62 games, give or take a false alarm here and there, but Bryant dominated on offense (42 points, 14-for-21 shooting, 12 assists) while Howard had 20 points, 15 rebounds, four blocked shots and three steals. ‘We complemented each other extremely well,’ Bryant said. ‘I directed us offensively tonight and he did his thing defensively for us. He just said, ‘To hell with it. I’m just going to dominate the game on the glass. I’m going to dominate the game defensively.’ So of course, Howard must have been prodded by Bryant. ‘He brought himself along. I didn’t do anything,’ Bryant said quickly. ‘That’s a conscious decision he made.’ […] ‘We’re certainly much tougher now than we were at the beginning of the season,’ Bryant said. ‘But adversity does that. It can do one of two things. If you have a weaker mind, it’ll break you. But if you decide to let it build you up, make you stronger, then that’s what happens.’ Yet Bryant couldn’t completely puff up the night as a career keepsake. It was only New Orleans, after all. ‘If I’ve got to remember this game years from now, my career’s got issues,’ he said, laughing.”