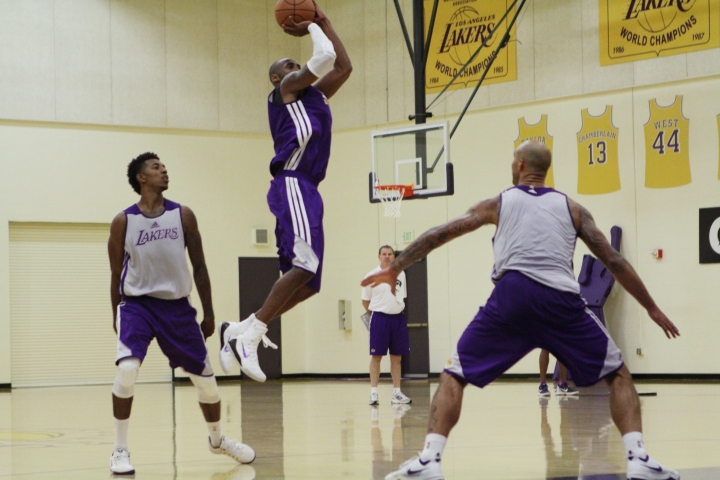 Bean ate both guys up on the court, and let them know all about it.

Kobe says the chirping is good for competition.

Moments after drawing a foul on Nick Young, Bryant chirped, “Don’t play with me Nick. You ain’t strong enough.” Later on, Bryant sank a fade-away jumper over second-round draft pick Jordan Clarkson, a sequence that nearly made him fall to the ground. Chided Bryant: “Don’t hurt yourself young fella.”

“We’re competing. We really try to push each other, especially when we get tired,” Bryant said. “When guys are talking trash back and forth, you can’t help but play at your best.”

It appeared Bryant reserved his sharp tongue mostly for Young, who went up against him one-on-one in several sequences. After Bryant drew a foul, Young pleaded to the official, “don’t feed into that and reward him just because he’s Kobe Bryant.” When Young continued talking trash during one of Bryant’s foul shots, the Lakers’ star said, “not to me you don’t.” […] “He playfully does it. But then I take it to another level,” Bryant said of Young. “I do it because like I said, when you’re tired, it’s very easy to go through the motions. But when somebody is talking to you, you have no choice but to perform.”