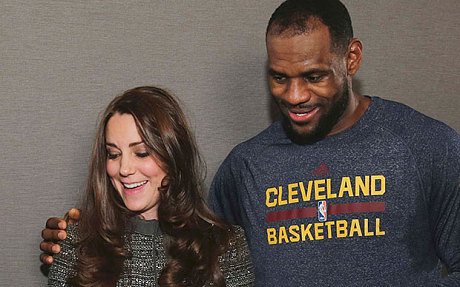 King James either didn’t know — or simply didn’t care about — royal protocol Monday night in Brooklyn, as he took pictures with the Duke and Duchess of Cambridge following the Cleveland Cavaliers’ 110-88 road win against the Nets.

LeBron casually put his arm around Miss Middleton during the photo-op, which is apparently a no-no.

For what it’s worth, Jay Z and Beyoncé appeared to have kept a safe distance while being introduced to the royal couple.

Prince William and the former Miss Middleton were also presented with NBA jerseys, including a small one for their young son, Prince George.

While posing for photographs, LeBron James appeared to surprise the Duchess of Cambridge by breaking royal protocol and placing his arm around her.

The breach of protocol echoed the time when Michelle Obama caused a stir by putting her arm around the Queen in 2009.