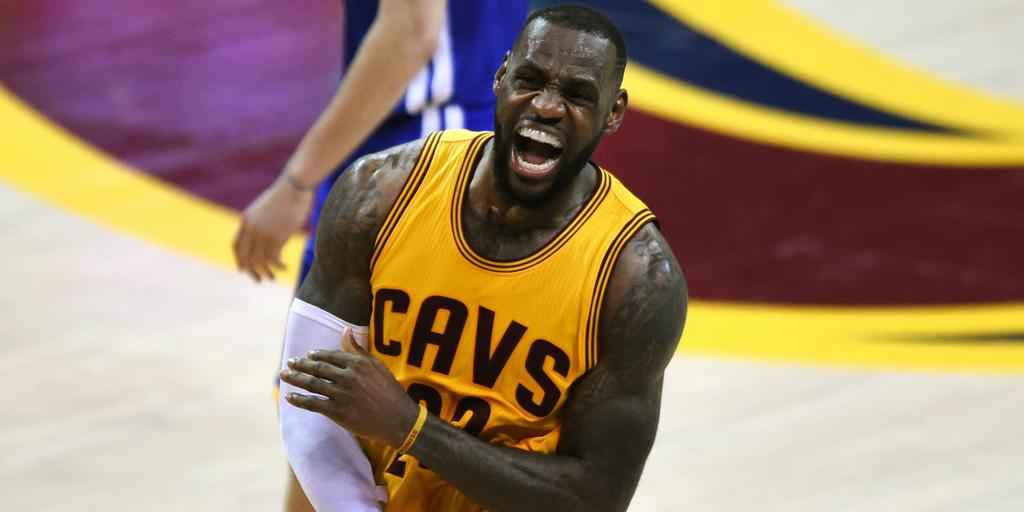 Behind yet another superhuman effort from LeBron James—40 points, 12 rebounds and 8 assists—the Cleveland Cavaliers hung on Tuesday night for a 96-91 victory in Game 3 of the NBA Finals against the Golden State Warriors.

James has done basically everything for the short-handed Cavs through these championship games, helping create nearly 70 percent of all their points through the series.

.@KingJames with 123 points in the first three Finals games. Another all-time record. pic.twitter.com/QCj0c9kb8H

LeBron James has scored, assisted, or created 200 of the Cavaliers' 291 points through the first 3 games of the #NBAFinals. Beyond unreal.

Matthew Dellavedova continued his unlikely assault on the Warriors, chipping in 20 points and holding MVP Stephen Curry in check until a late-game detonation.

The Cavs feel like the Warriors don’t want this physical style of play, particularly Steph Curry, who finally got hot in the fourth quarter Tuesday. Before that late outburst, Dellavedova’s physical style was making life miserable on Curry. […] “It’s East-style basketball right now, lot of grabbing and holding,” said Warriors center Andrew Bogut, who is well-versed in it after spending his first six-plus seasons in Milwaukee. “It’s physical. We’re trying to get adjusted to that in a way. It’s tough.”

When the Cavs won Game 2 at Oracle Arena, James spiked the ball, roared and stomped his feet. He understood the significance of such a game and he really, really, REALLY wanted that win. But this time, when the game ended, James merely placed the ball on the court. It was as if the Cavs understood they had escaped with one. They blew and 11-point lead over the final 3:14 in Game 2 and needed overtime to survive. They were up 17 entering the fourth quarter Tuesday and nearly gave it all away again after the Warriors scored 36 points in the fourth, easily their best quarter in this series. […] “It’s not satisfying when they end the game with 91 (points),” James said. “We hold them to 55 points for three quarters and we allowed them to break off with 36. That’s not satisfying at all. We’re a young group and we have to learn from our mistakes. We had a lot of mistakes in the fourth quarter.”

James has scored 123 points now in these three games, the most through three Finals games in NBA history. He surpassed Rick Barry, who scored 122 points in three games for the Warriors in 1967 – and the Warriors lost the series in six games to the Philadelphia 76ers. […] “I’m not okay with it, but I’m so outside the box right now,” James said of his lack of efficiency. “This is a totally different challenge. I’ve never played where two All-Stars were out. So it’s a different challenge for myself, and it’s outside the box, but it’s not too far. It’s not far for me to go grab.”