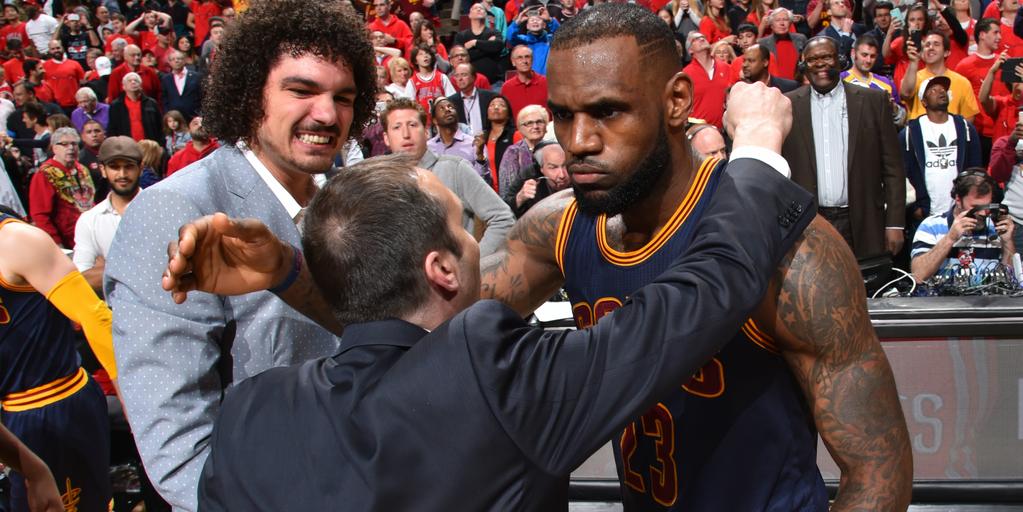 With the Cleveland Cavaliers’ season practically on the line Sunday, David Blatt’s decision for someone other than the world’s greatest player to take the game’s final shot was quickly overruled by LeBron James.

King James demanded the rock and drilled a deep baseline fadeaway to give the Cavs a dramatic 86-84 win, and evened up the Eastern Conference semifinal series with the Chicago Bulls at two games apiece.

"I'ma get open, just get me the ball. I'm going to win this for us." —@KingJames on the final shot, a game-winning 3 from the corner

LeBron says he was supposed to take the ball out on the final play. But he told coach "no way" and scratched the play. Wanted the last shot.

James finished with 25 points, 14 rebounds and eight assists in the pivotal victory, and his last-second heroics caused pandemonium back in Ohio.

Cleveland showed plenty of resolve, and was able to answer the bell following a devastating blow from Derrick Rose in Game 3 Friday night.

LeBron James watched his coach draw up the final play — and then drew one up of his own. […] “Give me the ball and get out of the way,” he said.

During a stoppage the Cavs only got because the officials were reviewing a play, Blatt designed a play that had James taking the ball out. The four-time NBA MVP has been in enough pressure situations that he vetoed his coach. […] “I was supposed to take the ball out,” James said. “I told Coach there was no way I’m taking the ball out unless I could shoot it over the backboard and go in. So I told him, ‘Have somebody else take the ball out.’ The play that was drawn up, I scratched it. I just told Coach, ‘Just give me the ball. We’re either going to go into overtime or I’m going to win it for us.”’

James rolled his left ankle in the third quarter, but fought off the injury. He committed eight turnovers and struggled again from the field, hitting 10 of 30 shots after going 8 of 25 in Game 3. But he also had 14 rebounds, eight assists and a shot that gave Cleveland fans some comfort after Rose broke their hearts on Friday night. […] “There’s nothing you can do about it,” Rose said of James’ contested jumper. “He hit a great shot. He’s a hell of a player. We just have to make sure that if we’re in that position again, just make sure that we force him out a little bit more or make someone else get the ball.”