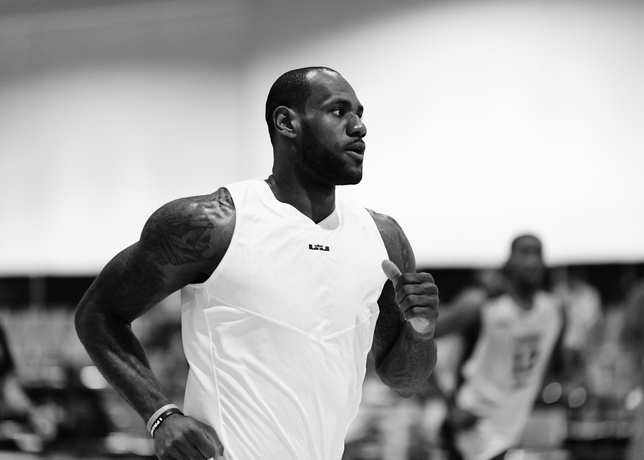 Ten years ago, in the summer of 2003, most of the major shoe companies rolled out the red carpet for LeBron James. Elaborate pitches were planned, and lengthy meetings with the precocious teenager and his representatives ensued. Nike, as we all know, won the LBJ sweepstakes and hasn’t looked back since.

Well now they are, sort of.

In honor of the 10th anniversary of James’ deal, Nike has partnered with award-winning writer Lemon Andersen to produce “Rubber City Soul.” The poem, an homage to James’ roots in Akron and unparalleled drive to improve, isn’t Andersen’s first collabo with the footwear giant. In fact, he was a part of Nike’s initial interaction with James a decade ago.

With the NBA season underway, the 11 on shelves and Soul on YouTube, we spoke with Andersen about “Rubber City Soul,” and about greatness.

Lemon Andersen: No doubt. I have this interesting relationship with Ohio. I’m pretty fascinated by Ohio and that kind of small town drive. So, I met LeBron 10 years ago, because I had the opportunity to come out with Nike to help bring this athlete in. They called me out and said, ‘We want to celebrate our signing of LeBron, and we want you to come down and spit a piece.’

They flew four poets into Portland, and next thing you know we were busting in front of this giant who was 18 years old. After that, I became interested in him. When I found out he was from Ohio—I had this relationship with Ohio from years before. The small midwestern cities there go through a lot: they have identity crises; they’re nobodies; they’re stuck in the middle; there are no oceans near them—I just kept following him.

I saw him grow. I saw the trials he was going through as an athlete and as a human being. He was in Cleveland, but I knew the relationship between Akron and Cleveland is like that Brooklyn-Bronx joint. As the years went by, I kept telling people I was part of his deal. Next thing I know, Nike called me up and said, ‘It’s been 10 years, want to write a piece?’ I wrote the piece and I made it all about Akron. They were like, ‘Wait, wait. We’re trying to move this forward.’ We found a balance and it ended up becoming this great narrative piece that I’m proud of.

SLAM: Does it incorporate any of the ideas or verbiage from your original piece for LeBron from a decade ago?

LA: No, not at all. I was not as good back then. I was one of those stereotypical self-expressive poets, to be honest. I was good, and I was on a Broadway show, but I’ve went back to school and trained as a writer. What I did for “Rubber City Soul” was write this almost Iambic Shakespearean narrative. It’s almost like it comes across as this campfire story. Back then, I couldn’t have written this. I had no idea about storytelling styles. Now I’m a playwright and a dramatist, not just a spoken word artist.

SLAM: Do you remember if James had a reaction a decade ago to your original poem?

LA: What I thought I was spitting was dope, and I thought he liked it. I believed he liked it a lot. It was hood and edgy. That’s what I’ve always done. That’s how I ended up doing Def Poetry. I ended up with jobs because I kept it real, not because I was the best poet. So when I busted for LeBron, I kept it real to the streets. I think he liked that.

SLAM: “Rubber City Soul” doesn’t even mention James’ name or identity in any overt way. That’s a nice touch.

LA: Not at all. Since I wrote the original poem, I’ve taken my job a lot more seriously. I had my back against the wall, just being a street poet. Nobody was hiring me and universities weren’t respecting me, so I had to take myself more seriously. While I was taken that journey, LeBron was taking his journey. So our rough rides were pretty similar. Even I though I was in movies and and acting, I was still trying to grow; LeBron was doing the same thing in his own way.

So writing this was about the Akronite philosophy.  What I felt was, you just keep rising. You have to go through life fighting for more. That made it easy to write. It’s about a journey, about coming of age. It’s like the Odyssey.

SLAM: Like you write in this piece, “Talent is given; greatness is earned.”

LA: That’s right. I don’t like being called talented, I like to work for it. I want to earn it. I love that about LeBron. This isn’t even something I necessarily wrote; LeBron brought it out of me. I’m really excited about the athlete and human being he’s becoming. He’s sitting on his throne. I don’t see him as chasing Michael Jordan anymore. He’s just different.