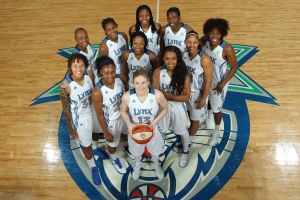 There are many names in the WNBA MVP debate in 2011 with players throughout the league leading their teams to great seasons or posting amazing individual stats. Although the definition of what it truly means to be MVP is undefined, as it means something different to nearly everyone, there should be a lot of weight in the responses of players who know certain candidates well. For example, take Tina Charles of the Connecticut Sun and Lindsay Whalen of the Minnesota Lynx.

“Obviously, both are huge for their teams, but I’ve been able to really just experience and enjoy playing with Lindsay Whalen,” said Maya Moore. “There’s no question without her our team would be very, very different and she’s my MVP for this team. She’s irreplaceable and so consistent for us. It’s been amazing. I think that’s something that I don’t know if you can appreciate unless you’re here with her every day to see that consistency from her and how hard that is in this competitive league. She’s definitely got my vote. She’s got the qualities and characteristics that it takes—the consistency, the balance, she’ll get rebounds and tons of assists, always scoring points for us. It’s really fun.”

Whalen has season averages of 14.0 points (16th in the league), 3.4 rebounds and 5.9 assists (1st in the league) per game and even those statistics don’t tell the entire story of her impact on her team. She has always been a talented player, but as a veteran she has now also become one of the smartest players in the WNBA.

“I don’t think there’s any question about that. She’s so locked into every possession,” said Lynx head coach Cheryl Reeve. “What happened, what needed to happen if it didn’t happen and then going forward, she’s a great read of who needs to have the ball. Maybe if Seimone hasn’t gotten some shots, she understands to get her some shots or if Seimone is hot, what plays to get her the ball. She has great recognition of when she needs to do her thing. She’s fun to watch for sure and I just think, as a teammate, she’s really fun to play with.”

Each of Whalen’s teammates echo their coach’s response, as they love playing with her.  It is also an experience for her teammates because while Whalen does, in fact, deserve a lot of the credit for the Lynx success this year. However, she doesn’t want it, doesn’t need it and she is quick to put that credit on the shoulders of her teammates.

“I think the team has been very consistent all year and we’ve worked really hard,” said Whalen. “Coach has put us in a great system that fits a lot of people’s strengths and I think I’ve just been being aggressive, but playing within my strengths. When you have so many great players on the floor as we do, it’s like any given night a different player can step up. I guess I’ve just kind of benefitted from a lot of that and made some shots, playing with confidence and just trying to play hard every night.”

One of the keys to the team’s success is the communication between coaches to players and players amongst themselves. Without proper communication—at an MVP level—a team will falter in crunch time and the Lynx have done very little of that in the summer of 2011. One of the biggest reasons for that level of communication is due to Whalen.

“I think Whay established that very early on and I’ve been around a lot of different players and I think Whay seeks it out, even if she just comes over to say, ‘I should’ve done this’ or ‘Hey, what do you think of this?’ said Reeve. “She just likes that connection and I would say that it’s an accurate statement that typically you do communicate with your point guard more than most players and she’s that player that likes it and obviously I like the interaction I get with her.”

Of course, sometimes communication means a leader needs to step up and get in teammates faces when they’re not performing as they should. Whalen has no problem in doing so, but has found that perfect blend of saying what needs to be said while keeping the respect and adoration of her teammates.

“Just my second year here, being more comfortable with everyone and just a point guard taking that leadership role,” said Whalen. “Coach challenged that to me this year and everyone on the team is so receptive to the leaders on the team and the captains. Everyone listens and takes it to heart. Also, I think everybody kind of leads by example too. I feel like sometimes you don’t have to be screaming and yelling as much. You can be leading by example, but then you can also be vocal when you need to be vocal and I felt comfortable in those situations this year when those times have come up.”

Yet, with a leader such as Whalen on your squad, you can trust that when there isn’t time to stop play and communicate during a timeout, she’ll make the right calls of her own accord. Through her play throughout her career, she has earned that right.

“I like when she calls the plays,” said Reeve. “She prefers communication of what plays to run, she likes it when I give her, ‘Hey, think about this next time.’ I think she operates better when she’s just in the flow. We don’t have the armbands of plays and I have the benefit of preparation before games of knowing what our playbook is and I can communicate with them, but I also have the stoppages of play where I can look at our playbook and that helps her. She certainly has the green light to call any play she wants, she does look often to the sidelines, but she knows. She’ll look at me and say, ‘Get this for Seimone’ or ‘Get that for Seimone,’ and I’m like, ‘Sure, go at it.’”

A few years back, Whalen finished second in MVP voting behind Candace Parker, yet her stats are better this season. Leave it to Lindsay Whalen to be unimpressed by that fact, shifting the focus back to her teammates and the team she is attempting to lead to their first WNBA Championship.

“It’s hard to compare that year to this year,” said Whalen. “I feel like our team is so different, so I feel like the rest of the team. I feel like I’ve been playing well, but any given night it feels like a different player stepping up and can be someone to rely on to score or some nights it’s assists. It’s hard to really compare to that year because it’s a totally different group and I just feel like there’s a lot of talented people on this team that can really do a lot of things.”

While Whalen herself may not believe or acknowledge she is playing at a higher level than that season in which she finished second-place finish in MVP voting, her coach is more than ready to do so.

“Whay has a bounce in her step of confidence, leadership and I think she knows that as she goes, we go,” said Reeve. “Offensively, I think she’s a player that really understands mixing things up, driving to the basket, midrange game and the pick-and-roll has been such a big part of what we do. Her recognition, her reads off the pick-and-rolls has given people difficulties and it creates opportunities for other people. At the same time, I think Whay just came into this season understanding that she needed to score for us to be successful and her assists will come easier if she was looking for her shot and people had to guard her. She’s been playing at a high level.”

Being in the MVP discussion is great, a checkmark in an already wonderful season, but, as expected, individual achievements are not anywhere near Whalen’s mind. She’s focused on the team’s task at hand–now that they’ve locked up home court advantage throughout the Western Conference playoffs, they’re working to acquire home court advantage if they should reach the WNBA Finals. There are still things to clean up if the team is going to have the postseason they set out to achieve in the preseason.

“There’s always things,” said Whalen. “Little things, but it’s always going to be like that because you’re never going to play a perfect game. We feel pretty good about where we’re at right now, but we have six games to prepare and, as you said, we have to clean up a lot of the little things and when the playoffs come we’ll be ready to go.”

While there may be a leadership council on the Minnesota Lynx, there is one voice that has risen above the rest. It’s a quiet, humble voice off the court, but a sometimes demonstrative, sometimes encouraging and always spot on voice when on the court. The voice of a true MVP candidate in Lindsay Whalen, who took on the leadership role quietly, but incredibly effectively for the first-place Minnesota Lynx.

“I think Taj has helped them recognize that it’s kind of ok for you to be critical in moments and be hard on them,” said Reeve. “I think Whay, while she’s learned a lot from Taj, I just think she was ready for that. I think her understanding of what’s going on maybe is great, her comfort level is greater than what it was last year with her teammates and I think her connection with the group one through eleven, there’s great communication and connection. She’s a big part of that. She talks before practice. I count on them because they get tired of hearing from me and when Whay says something, it has great value to them.”

The individual accolades begin to come soon and the team’s goal is still out there in the future. Yet, as it should be, the unquestioned leader of the Minnesota Lynx reminds that the goal is the here and now. There is still work to be done and no time to relax or celebrate.

“I think we’re all just enjoying the journey right now, to be honest,” said Whalen. “We’re all enjoying each game and each practice, so that’s a long ways away.”

Lindsay Whalen would certainly take an MVP trophy if it were to be handed to her. However, she would much rather have the trophy she and her teammates can take on their own, hoisting it into the air inside the Target Center as WNBA Champions.