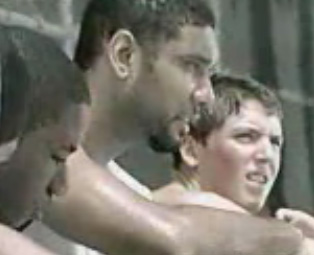 You may recall one year ago when adidas gave us exclusive access behind the scenes of their big summer commercial shoot. This year, we’d kind of been there done that, at least as far as our annual KICKS issue is concerned. But that doesn’t mean we still don’t get the exclusives.

Anyone who plays sports knows this — when you’re on a team you go from being an individual to becoming teammates to eventually becoming brothers. All the egos and self importance is left for the common goal of performing and winning as a team. Instead of a bunch of signature shoes, this year adidas is bringing a 3-tier approach called Team Signature:

• TS Lightspeed — The key silhouette designed to meet athlete’s needs and expectations on-court; Less than 14 ounces; TMAC is featured in the product campaign but the majority of adidas NBA players will be wearing this shoe on court when the season launches.

• TS Lightswitch — A mid-season modular silhouette (I have no idea what that means) that offers a customization angle. A removable insole liner gives choice of cushion or control; Gilbert is the lead athlete for this shoe and it provides more stability due to a radius heel cup and more lateral out-rigging.

• TS ProModel — Based on a signature silhouette approaching its 35th anniversary, this shoe is the evolution of the original. It will also be the key shoe during the All-Star 2008 game in New Orleans.

This year, instead of just the five guys from last year’s campaign (T-Mac, Duncan, Gilbert, Chauncey and KG), they also added my main man Dwight Howard. And here’s your exclusive look behind the scenes at the filming of their latest ad…