Three young guys from Louisiana—Tivonte Hardy (2015), Corey Davis (2016) and Mark Vital (2016)—made their way down to a tournament in Houston and left a trail of defenders in their path on the way to a tourney championship.

Not much is known about the tournament, the team or the recruits (aside from Vital, who holds offers from Baylor, Arizona and Louisville and has been making all of us who can’t throw down feel inadequate since he was in middle school), but we do know one thing: All three of these young guys can ball. 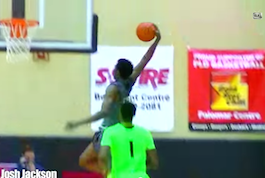