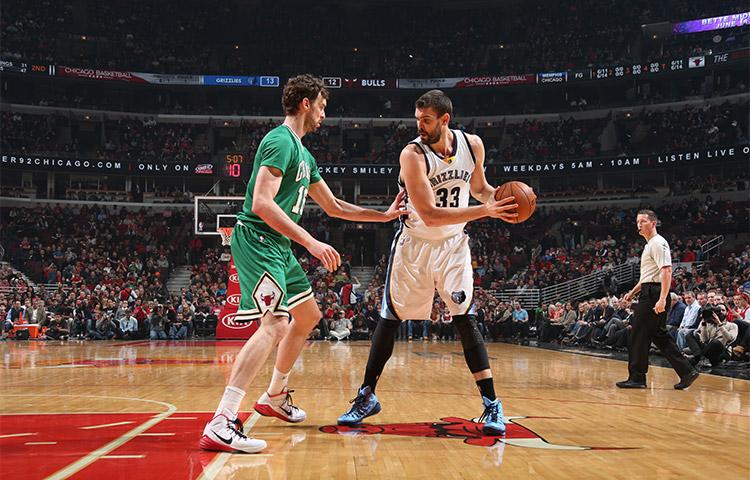 It was a frustrating Monday night for Pau Gasol and the short-handed Chicago Bulls, as the visiting Memphis Grizzlies took them out 101-91.

Marc Gasol finished with a game-high 23, while big bro Pau only mustered 13 points.

Marc said he’d never seen his older sibling get so upset with the officiating.

Per the Daily Herald:

During Monday night’s third quarter, Bulls center Pau Gasol drove to the basket twice in a row, missed the shot, fell to the floor and didn’t get a foul call. After the second time, Pau sprinted back on defense and gave his brother an intentional foul, slapping him across the arms. […] “(That) frustrated? No. Honestly, maybe one time in L.A.,” Marc said in the locker room. “But to show his emotions that much … of course he was getting frustrated, and it’s part of the game.”

Pau was sending a message to the referees, not Marc, with the intentional foul. The entire game was a frustrating experience for the Bulls, who endured another sad, short-handed story. They went on a 23-6 run to erase a 13-point deficit in the fourth quarter, but the Grizzlies recovered to post a 101-91 victory at the United Center. […] The Bulls (39-26) lost their third straight game, playing without the injured Derrick Rose, Jimmy Butler and Taj Gibson. They now head out on a three-game road trip while the Big Ten tournament moves into the arena.

Back in the third quarter, Gasol set a screen and was knocked to the floor by (Zach) Randolph. It didn’t appear that Randolph put any extra aggression behind the hit. Maybe he just didn’t see the screen coming. Either way, Gasol had plenty to say to Randolph after the play. […] “I know he’s an emotional guy; he wants to win really bad,” Marc Gasol said of his brother. “In the first half, they went through him a lot and he was getting good looks. In the second half, it was a little different. We won.”