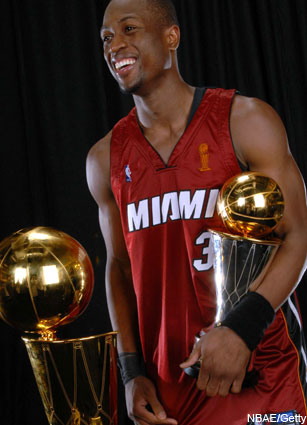 Coming out of Harold L. Richards High School (IL) in 2000, Dwyane Tyrone Wade, Jr. was an unknown to the outside world. Unknown by coaches, scouts, analysts, fans and everyone in between. The lanky 6-4 guard was under-recruited and overlooked. To virtually everybody, Dwyane Wade was a nobody.

Fast forward 12 years, and you get this:

—Consensus Top-5 player in the world

After being ruled ineligible his freshman year at Marquette University, Wade took the college landscape by storm with a 53-13 combined record in his sophomore and junior campaigns, capped off with a Final Four run in the 2003 NCAA Tournament. Soon after, the Miami Heat selected Wade with the 5th pick in the 2003 NBA Draft, and have reaped the benefits ever since.

Since his NBA inception, Dwyane Wade aka DWade aka Flash has been one of the most exciting, competitive and crowd-pleasing players in the NBA. His uncanny blend of quickness (with the rock in hand, he changes direction faster than anyone in the League, maybe save for DRose), versatility (a guard who excels on the wing and the block), unselfishness and fearlessness have made Wade an icon, on and off the basketball court. Time and time again, Flash has displayed that he’s got it; when his team needs a bucket, he will deliver. His innate ability to come through in the clutch coupled with his determination to win propelled him to an NBA title in only his third season—as he became the fifth youngest Finals MVP in League history—and an Olympic gold medal soon after.

Currently, DWade is nursing a leg injury that will keep him out for tonight’s game against the San Antonio Spurs. But today is not about the present. Today is about reflecting, and to celebrate Wade’s 30th birthday, we’ve compiled 25 of his best moments to date. There’s some dunks, assists, blocks, vintage high school and college tape and, of course, clutch moments. So roll through the gallery above for the ultimate DWade tribute. Feel better and happy born day, Dwyane!