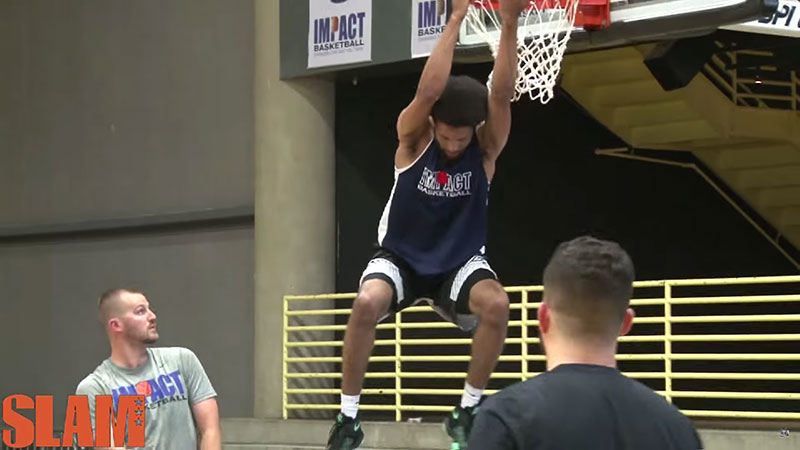 Every year, there’s a mid-major player who ultimately finds himself shooting up boards as the NBA Draft nears. While many common basketball fans may not be familiar with the rising prospect, NBA scouts certainly are.

This year, St. Joe’s forward DeAndre’ Bembry is that guy.

A native of Charlotte, NC, Bembry moved to New Jersey with his mother, who relocated for a new job opportunity. He played his final two seasons of high school ball at the legendary Patrick School (formerly known as St. Patrick’s), but he still flew under the radar. A few high-major schools entered the picture late in the game, but Phil Martelli and St. Joe’s won him over with their loyalty.

Averaging 17 points, 8 rebounds and 4.5 assists during his junior season, the versatile 21-year-old played all over the floor in Philly. To get his game right for the NBA Draft, he enlisted the services of Joe Abunassar and Drew Moore of Las Vegas-based Impact Basketball to take his game to new heights.

SLAM watched Bembry workout in Sin City and in Los Angeles during his pro day, and we were able to get a great feel for his game in the flesh. He showed off an above-average handle for a wing, weaving through cones during drills and creating for himself at will. Shooting the rock from the perimeter, he showed range out to the NBA three-point line, and while no one is going to be touting him the next Brad Beal, he can hit it when left open. When it comes to finishing at the rack, DeAndre’ can rise above you at the rim, but has an old-school feel with some of the creative takes that he has at the tin.

Perhaps the most impressive part of Bembry’s game is his ability to utilize his size and play with ball screens at 6-6. Throw a smaller dude on him and he will go to the block or pass right over the top. Throw a slower guy on him and he has the ability to create off of the dribble.

“I played point guard at times and ran numerous amounts of pick and rolls. I’m very comfortable running point guard, coming off, making the right read, and potentially getting myself a shot,” says Bembry. “These last two or three years in college really helped me coming off of screens and playing read and react basketball.”

In order to reach his highest potential, Bembry must improve on defense and continue to bulk up so he can defend the bigger wings that the League offers. While he is an adequate shooter from deep, improved consistency on his jumper would only make his creative drives to the basket much easier. Still, we are looking at a 6-6 shot creator who will be taking his game to the League and bears a striking resemblance to He Got Game‘s Jake Shuttlesworth.

“I’ve heard it all from Jesus Shuttlesworth’s Dad to Dr. J,” DeAndre’ says with a laugh in regards to his ‘fro and facial hair. “In college, the fans were ruthless.”