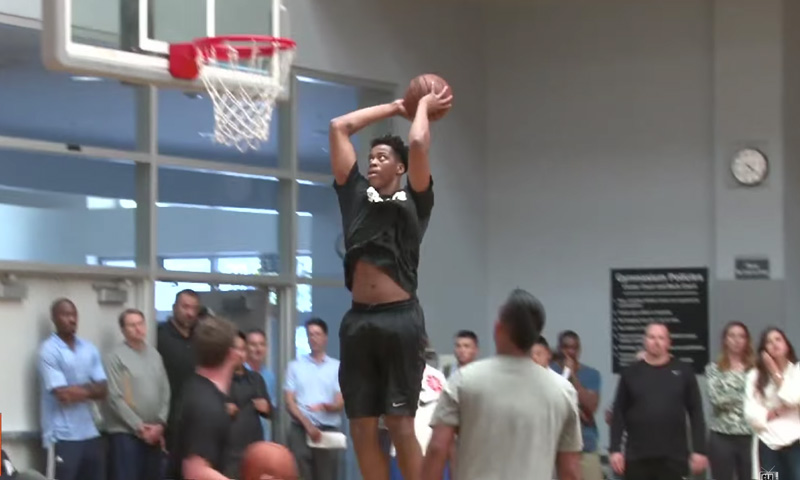 It was 2012 and the Muskegon Heights school district was closing. Enrollment was down and there simply wasn’t enough money to keep the doors open. Consolidating with Muskegon High School, a basketball power on the state’s west side was formed.

The player who would ultimately achieve the most success for Muskegon coach Keith Guy was a gangly 6-7 sophomore.

“He’s come so far,” exclaimed Guy from the BDA Sports pro day. “From the time that I got him in 10th grade to this point, I don’t think there’s a player in the country that has improved this fast.”

By the time Deyonta’s junior year rolled around, his high school coach knew that he might have something special on his hands. He started to hit up scouts in the region and throughout the country to them that he had something tucked away far from the D.

I first got wind of him early during his junior season, and by the time the 2014 EYBL season came around, he was a priority to check out. But his transformation from under-the-radar big to elite prospect did not come easily.

“Honestly, we worked on all phases of the game every day,” Guy said. “We worked on rebounding, his timing, pick and pop, pick and roll. Low post stuff. Running the floor. Some people are born with it and he is. We just had to get it out of him.”

Not only did the coaches at Michigan State see that during his lone season in East Lansing, but NBA likes did too. With all 30 teams in the building, Deyonta did a one-on-none workout that allowed him to show some of the things we didn’t quite see at Michigan State.

He shot the ball well from mid-range and once you saw him in the flesh, you realize how big of a dude he is. At 6-11 and approaching 250 pounds, he has a simply massive frame that has plenty of room to fill out.

Toss in a 7-3 wingspan and emerging offensive game, and you see why there is lottery potential all over him.

While there has been immense levels of improvement, Deyonta is far from a polished prospect. He is still rough around the edges, but what one team may find as a weakness, another may find as a strength due to his work ethic and ability to improve rapidly.

In today’s generation in which many players are unwilling to accept hard-nosed coaching, Davis is a bit of a throwback. Not only will he take it, but will embrace it, leading many to believe the sky is the limit for his developing big.

“You can get him and get after him, and you know what? He’ll take it,” his high school coach said. “I was in his face all of the time and then he went to college to play for a coach who was double what I was. He responds and he doesn’t mind you getting on him with tough coaching.”