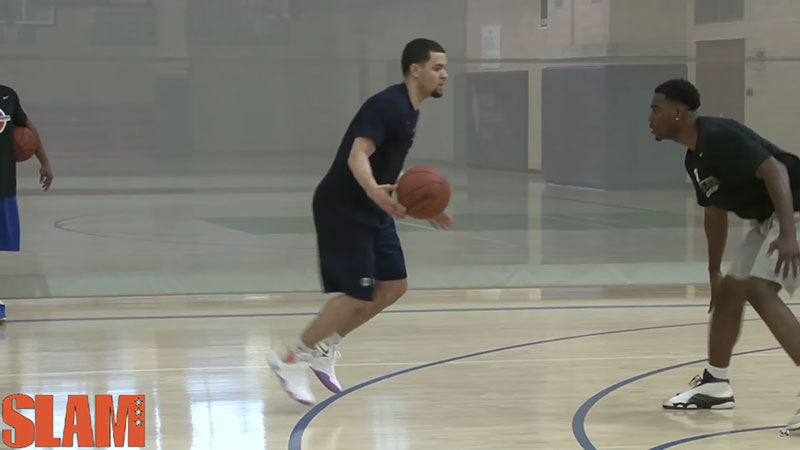 Fred VanVleet has been proving everyone wrong for a minute now.

When his father was murdered, VanVleet made it out of the streets instead of turning to a life of crime. Even though he was destroying people on the AAU circuit with Illinois Pryme Time, most scouts told him that he was too small to play at a high-major level. And once he got to Wichita State, he had to wait his turn behind Malcom Armstead.

But by the time his sophomore campaign rolled around, VanVleet had the keys to the castle.

During his three years as the full-time starter for the Shockers, all the Rockford, IL, product did was win. With VanVleet running point, the Shockers won two Missouri Valley Conference titles and went undefeated in the regular season and conference play during the ’13-14 campaign. Their 94-14 record under VanVleet’s leadership was better than any other point guard in the country.

But at just 6-foot, he is fighting to show NBA teams that his size will not be an issue. This took him to Indianapolis.

While finishing up his college degree, VanVleet bounced to Indy to train with Chris Thomas of World Domination Basketball. The two gave SLAM a glimpse of the daily grind that the 22-year-old is going through in the pre-draft process. Blending plyometric work to improve athleticism and series of drills to prepare VanVleet for the NBA Combine, the three-a-day workouts certainly seemed to be paying off.

“I think Fred was able to show the NBA types exactly what he’s about by the end of his college career. Now he’ll be able to prove it,” Thomas explains. “People say, ‘Wichita, they don’t play anyone, they’re mid-major.’ Now all playing fields are equal, and it’s a matter of showing how he can compete. He’ll prove his point.”

With a ton of emphasis on ball-handling, it was immediately evident that Fred had the handle to play the point guard spot in the League. He kept the rock low and tight, changing speeds to constantly throw the defense off once the live action started. VanVleet was great at creating separation, automatic shooting the rock from mid-range, and utilized the Eurostep move to slide past secondary defenders looking to step up.

“The biggest thing for me is his conditioning and athletic performance enhancement,” Thomas says. “One of his knocks is size and average athleticism, so if we can use these weeks to build up his strength, speed, agility and quickness, he’s going to present himself as a real good point guard. We’re also working on his shooting with the NBA ball and from NBA distance.”

Like most players fresh of out of college, VanVleet is still adjusting to the NBA three-point line and new ball. Many scouts have also raised concerns about whether or not he has the foot speed to guard the game’s fastest lead guards. But once you factor in intangibles, work ethic and the high character that Fred VanVleet offers, you realize that he’s going to be just fine at the next level.

“He’s beaten the odds all of his life. I’m from the same hometown and it’s a tough deal. It’s the backyard of Chicago and is known for great point guards,” Thomas says. “Through high school, college and AAU, he has always had a chip on shoulder. He’s proven his point and backed it up. What you see is what you get.”