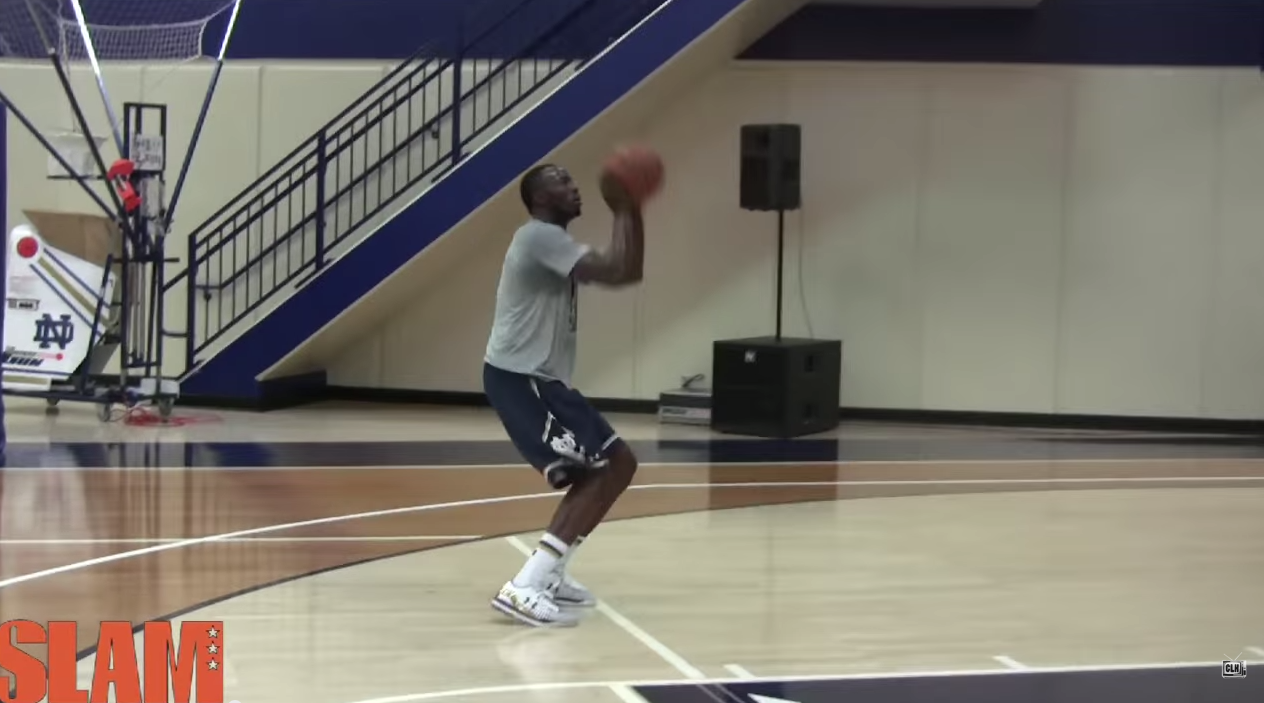 Certain things just come naturally. With a father, uncle, and little brother in the league, it only seemed fitting that Jerian Grant had a similar DNA ingrained in him. But at just 6-5, he didn’t have the height of his family members that proceeded him to the League. Or the athleticism of his best friend Victor Oladipo. This just pushed him even harder to put himself in the position that he’s in today as a potential lottery pick in next month’s NBA Draft.

“You’re going to have to outwork the next guy,” Jerian told us after a grueling two-hour workout with Seth Cooper. “That’s something that Vic and I have worked on since‎ we were freshmen in high school—waking up at 6 a.m. and putting that extra work in—because we knew we weren’t the guys who were going to get the ball handed to us like that. So we were definitely have to put in the work.”

Having the option to bounce to the League after his junior year, the 22-year-old opted to come back to Notre Dame and helped himself mightily in the process. Aside from firmly putting himself in the mix for the Lottery, he helped take the Fighting Irish to heights that they haven’t reached in quite some time.

Brey’s squad took home the ACC crown and was a missed three-pointer away from giving Kentucky their first loss of the season. Grant thrived in his coach’s spread pick-and-roll offense, too. Averaging 17 points, 7 dimes and 3 rebounds per night, he was able the show his stuff to NBA personnel while also pacing the Fighting Irish to a memorable campaign in his last go-around.

“It was great, man,” he said of his senior season in South Bend. “Playing with guys who are so unselfish and committed to winning is rare.”

Cooper added, “If you watched this year, Notre Dame’s offense was great in terms of spread-court pick and roll along with spacing. You could see him be able to take it off of pick and roll to score, hit the roll guy, and hit shooters. That will be a big thing for him at the next level.”

We got up with the pair in South Bend shortly before Jerian was set to take his last final exam. Making the time for us late on a Sunday night, we were able to see the intensity that fuels him. He performed every drill as if he were preparing for Game 7 of the Finals. You could not only see the talent that he had, but the genuine desire to get better.

There was considerable ball-handling work, both from stationary and static positions. Jerian is not the type of cat to hit you with a big AI crossover, but maintained a crisp handle that you aren’t going to be able to take away. Once he got to the rack, you were able to see some athleticism and creative finishes that you didn’t really see throughout his college career on the regular. He showed off a floater with either hand, euro-steps, and even threw down some serious dunks.

The biggest thing that the duo focused on was Jerian’s jumper. After a sizzling junior season (52% FG, 41% 3PT, 86% FT), his numbers flattened out a bit as a senior. He had the ball in his hands more and was the team’s primary shot creator, so there simply weren’t many catch-and-shoot opportunities. With some fine-tuning, Grant showed that he is going to be just fine. He hit 23-25 NBA threes at one point and was simply automatic with his one- and two-dribble pull-ups. It’s not the flashiest stuff in the world, but it’s exactly what you’re looking for out of a steady lead guard.

“The big thing with him is that we’ve really been getting his jumpshot going. He’s so good shooting the ball from mid-range that we’re just trying to get him consistent from NBA three every time,” explained Cooper. “That’s going to be the big thing for him whether he’s the primary ball-handler or the secondary ball-handler. Being that he can play both spots, shooting in the NBA is such a coveted thing and that is something he can bring to a team.”

Ideal size, experience running the pick and roll, and a consistent J. If you’re a team drafting in the teens looking for a guy to plug in right away, this is your guy. Bloodlines are on his side and while some players need a coach all up on their ass to get them going, Jerian Grant is the one pushing himself.

“I can do it all. I can knock down shots, something that all point guards are going to have to do, and I can definitely defend,” Jerian confidently said. “It’s the toughest position, but I’m definitely ready to go out there and show what I can do in the League.”