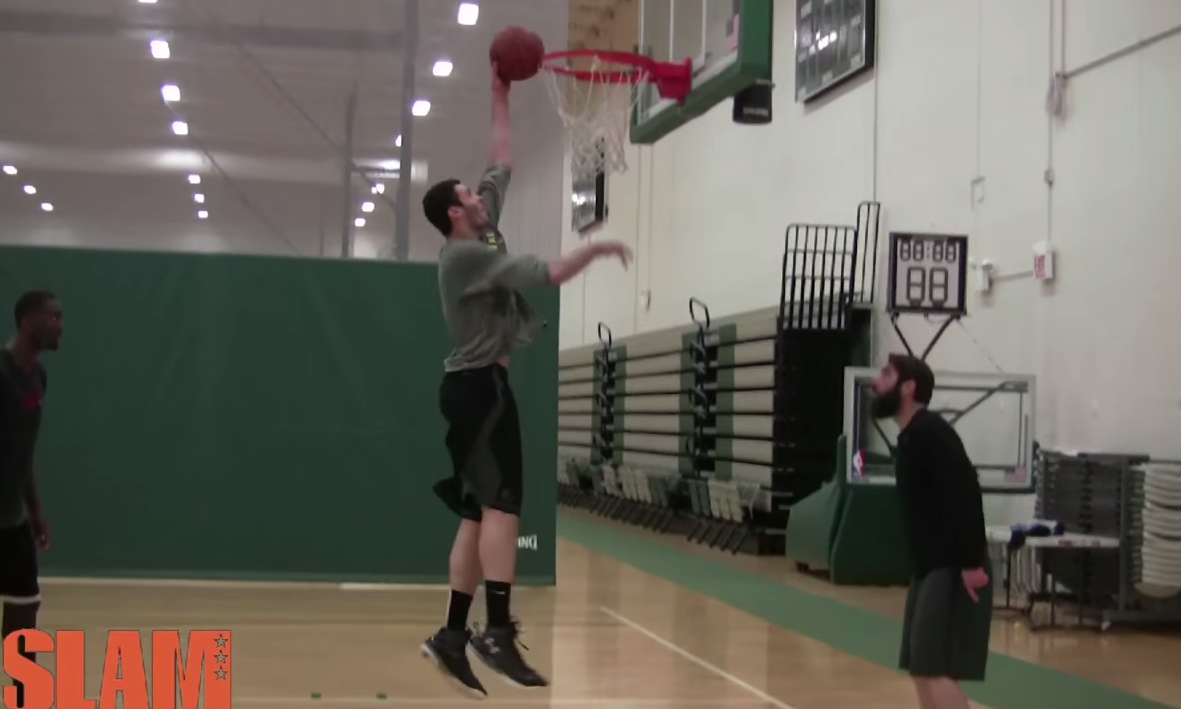 The apple doesn”t fall far from the tree, as far as the 2015 NBA Draft is concerned. Oregon guard Joseph Young has an NBA lineage with his father Joseph, who was a first-round pick. OJ Mayo’s little brother, Todd, is working out for teams after leaving Marquette to spend this past season in the D-League. Jerian Grant is the son of longtime pro Harvey Grant and RJ Hunter just finished up playing for his Pops at Georgia State. The first NBA Dunk Contest champ of all-time has his second coming trying to break in to the League as well, in the form of 6-8 forward prospect Larry Nance Jr.

Coming from my hometown of Cleveland, I was hip to Larry during his high school career. Playing at Revere HS about a half-hour outside of downtown, he didn’t necessarily play any of the areas power programs and wasn’t anywhere near the player that he is today. In fact, Wyoming was the only D-1 school to extend a scholarship offer to him, hence he made the journey across the country to play his college ball.

“I was 6-6 and I was real skinny. Our high school team wasn’t very good. If I was a coach, I wouldn’t have recruited me,” explained Nance Jr. on his journey to Wyoming. “Coach Shyatt came and started recruiting me late, and they were my only offer so I had to take the visit. Then I fell in love with the place and have loved it ever since.”

Larry had a career as a Cowboy that certainly surprised many fans and scouts alike. He posted averages of at least 15 points and 7 boards per night over his final two seasons. The 22-year-old also paced Wyoming to its first NCAA Tournament appearance in the last decade. All throughout the process, he threw down some ridiculous dunks and firmly placed himself on the NBA radar, despite tearing his ACL during his junior campaign.

We got up with Nance Jr. while he was doing his pre-draft training with Priority Sports. Training alongside the likes of Hunter, Sam Dekker, Cliff Alexander, Jonathan Holmes, Kevin Pangos and Bobby Portis, he was able to go up against just as much NBA talent on a daily basis as he did throughout his entire season at Wyoming. Then, working with Tim Anderson and Ryan Thompson in the skills department, he has been able to expand his game on the perimeter to new levels not seen before.

“I’m looking to translate to the pro game,” he responded when asked what he has been looking to work on in Chicago. “I’m a little bit undersized to be strictly a four, so we’re working on getting my ball-handling right to improve on my shots off of the dribble so that I can maybe do some work as a three. Guarding Sam Dekker is awesome for that.”

At 6-8, he is a bit smaller than most NBA teams hope for out of their ideal power forward. However, in the workout that we witnessed in the Chi, he displayed something everyone missed in college: his outside jumper. Larry showed off a smooth jumper with range out to the NBA three-point line and while no one is donning him to be an immediate sharpshooter, you can’t help but notice the potential that he has as a stretch four.

Jumper aside, Nance Jr. still seems to be regaining the explosiveness that he showed before his injury in college. He is incredibly quick off of the floor vertically and displayed a really high motor throughout all of the drills. The intangibles that he brings to the table with his work ethic along with the high IQ and character that he can offer a franchise make him an ideal developmental prospect for a team picking in the second round. Ultimately, Larry will have to convince a franchise on the court that he will be able to continue to evolve his game on the perimeter while maintaining the same type of energy that got him in this position.

As it stands today, Larry has been grinding his way through more than a dozen workouts with NBA teams. Not projected to be selected on any of the mock drafts, that doesn’t faze him one bit. In fact, it only motivates him more to carry on the family tradition of proving the doubters wrong.

“No one is projecting me to be drafted, but no one expected me to be here coming out of high school,” he says, “so I’m just hoping to surprise people again.”