The Texas big man put his explosiveness, athleticism and perimeter shooting on full display at a recent pre-Draft workout. 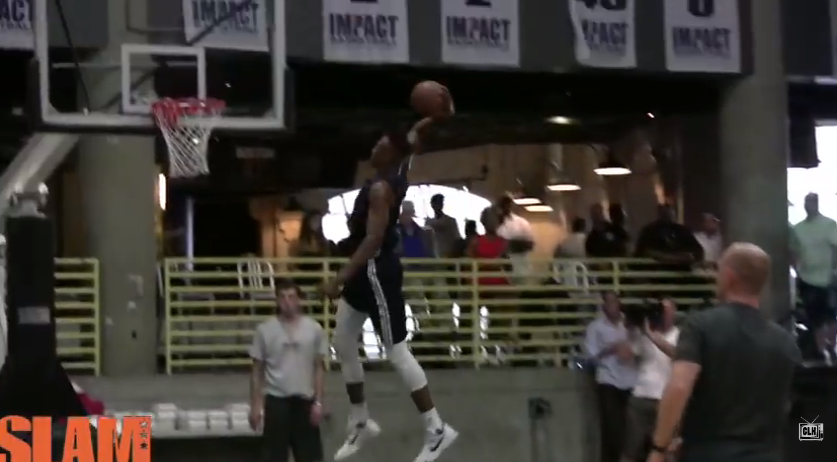 Myles Turner is a week away from becoming not just an NBA player, but a millionaire in the process. Two and a half years ago, that would have been laughable. After missing the entire summer leading in to his junior season, there was some buzz surrounding the 6-11 big man from outside of Dallas, but not many had seen him play. That all changed in the spring of 2013 when he went from unheralded project to top-10 player overnight playing with Texas Select on the AAU circuit.

During the spring of 2013, there was no bigger story than Myles Turner. The near 7-footer was bombing threes, blocking shots and playing above the rim on the AAU circuit. On his off weekends continuing throughout his senior year, he would make the three-hour commute to Dallas to learn from former NBA head coach John Lucas in Houston.

The strides that he made in his game were remarkable, and by the time that he made it to Austin to begin his collegiate career, he was right there for top player in the nation. Though he didn’t dominate from the jump at UT, he showed enough to be firmly in the Lottery mix.

Still, people constantly worried about his health based on the way that he ran the floor. There were, at times, that he looked like he was hurt getting up and down. After watching him in person in Las Vegas, that is a thing of the past.

“It was a concern that we heard from evaluators. His biomechanics were great. He was medically cleared and we put in extensive work on how he runs,” his trainer Drew Moore explained. “Naturally he’s a 19-year-old kid who is going to get stronger. As he develops a better core, the body is going to improve how he runs. We broke it down to every basic movement.”

Working with Moore, Joe Abunassar, and the rest of the staff at Impact Basketball in Vegas, that was evident. In fact, during the ASM Sports Pro Day, they made it a point to show the 150 NBA executives how much he improved in this facet. They put him through full court drills that allowed him to glide up and down the hardwood. He crushed dunks in transition and showed off much more bounce than we saw in Austin. These improvements alone were enough to take NBA scouts aback, much less his ability to shoot the pill.

Always known for being equipped with a nice J for a big man, Myles really showed how much of a threat that he can become on the perimeter. He made over half of his threes from the NBA line and his ability to stretch the D has coaches dreaming of him as a trail big man. In pick-and-pop scenarios, he can quickly create separation and really hit it from mid-range. His role at Texas didn’t quite call for him to do this on the regular, but once he got to Sin City, it was a focal point of workouts.

“We’ve been working on his mid-range shooting. He can shoot it out to NBA three, but we worked out from mid-range,” Moore said. “Scoring one-on-one in the low post against defenders, too. Simple isolation moves and their counters on the block.”

With his back to the basket, he is still a work in progress. Myles’ moves are a bit mechanical and it’s immediately evident that he’s more comfortable facing the rim. His 240-pound frame will need to continue to add strength if he hopes to defend some of the more capable back-to-the-basket cats in the League, and his foot speed will need work to lock up on today’s 4s who go to work facing up. Still, his combination of size, shooting and upside will find his name called very early one week from now.

Comparisons to LaMarcus Aldridge and Chris Bosh have run rampant. After all, the three are all near 7-footers from the Dallas area who can stroke it out to the NBA three-point line. They all were exceptionally long with slender frames that had the ability to fill out. Likewise, the trio all had significant development to make as back-to-the-basket scorers at the next level.

His physical gifts should warrant a lottery selection, but if you ask Moore, it’s something else that is going to make him thrive at the next level.

“His sheer size and explosiveness are going to make him successful in the League. He’s at a point where he’s going to get a lot better in all facets of his game. You’re going to be able to teach him a lot and he’s just going to keep getting better and better.”