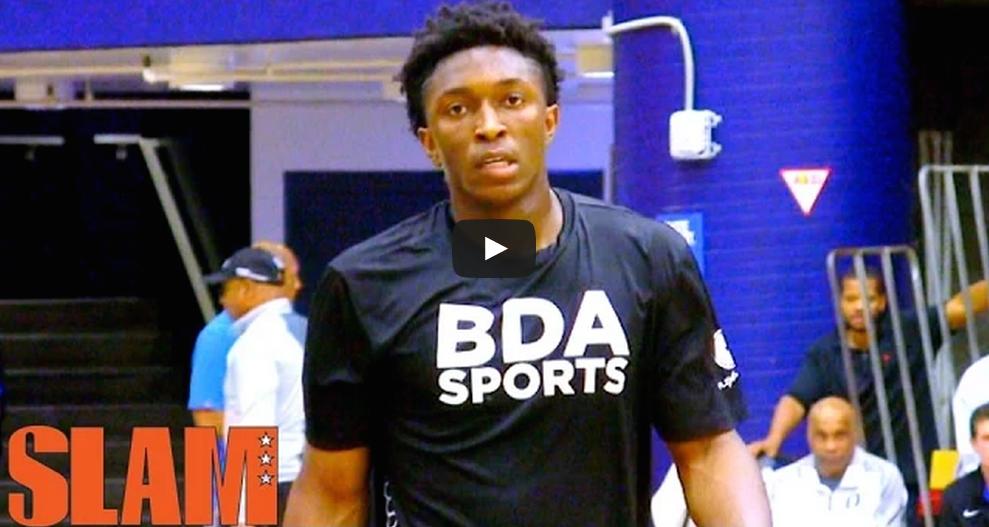 Those close to Stanley Johnson could see this day coming for a long time now. Since before he entered high school, Johnson looked at the game as if he were already a pro. He went to Southrn California’s most prestigious high school basketball program (Mater Dei) and accomplished feats that had never been seen before. Four years, four straight state titles. He ran with one of the most legendary AAU programs in the Oakland Soldiers and won gold medals with USA Basketball. It only seemed right that a ‘chip would follow when he joined an absolutely stacked Arizona squad, but that wasn’t the case.

While the team was ranked No. 2 behind Kentucky for much of the season, their premature Elite 8 loss to Wisconsin left a sour taste in everyone’s mouths. Johnson’s averages of 13.8 points and 6.5 rebounds per game were enough to earn him PAC-12 Freshman of the Year honors and an All Pac-12 First Team selection. Still, the lofty expectations set out for him were not met. After highly considering returning for his sophomore go-around, the 18-year old committed to the NBA Draft.

“He’s just stayed with it. A lot of kids start off looking like the hare or the tortoise,” his longtime trainer Charlie Torres told SLAMonline. “Stan was the tortoise at first and then when everything clicked, everyone thought he was the hare. Everyone thought he had been there his whole life, but no, he had to work to get where he is now.”

We got up with Johnson at the BDA Sports Day, where he got the opportunity to audition in front of approximately 150 NBA scouts. Training with Torres and Shea Frazee, Stanley showed NBA scouts what his game is all about. Going one-on-none (on the opposite end, Wisco big Frank Kaminsky did the same), he went through an hour long workout that showcased as much of his offensive arsenal as one could see in this setting, making his case for top wing in the Draft in the process.

Stanley went through a number of drills showcasing the combination of power and skill that he brings to the table. He displayed an explosive first step, tighter handle, and simply crushed the rim when he was attacking the rim. While the comparisons to LeBron were certainly unfair, you could see the way that his 240-pound frame could bully most opposing swingmen, even in the L.

Once the shooting drills started, Johnson became the talk of the workout. He shot it well from the NBA three and from mid-range, both with his feet set and off of the dribble. His release was simply effortless with a flick of the wrist from the NBA line. What had everyone talking was not only the amount of shots that he made, but how he made them. The Oakland Soldiers product had an incredibly low release and while he got his shot off quick, it had NBA personnel talking because it isn’t every day you see such an elite prospect with a release point below his forehead.

“Come on man, aren’t you guys over this? I’m sure all of these scouts had the same questions about Steph Curry,” Torres shot back about the concerns over his J. “He’s 6-7, 240 and if you think someone is going to block his jumpshot, you’re crazy.”

There were things that this workout didn’t allow Johnson to show, though. It didn’t allow NBA personnel to see Stanley’s ability to run pick-and-roll basketball. It didn’t showcase his above average court vision for a wing. Nor did it allow you to see that his size and strength allows him to defend multiple positions on the perimeter. There is just a lot to Stanley Johnson’s game that we didn’t see in Santa Barbara.

“Stan is a great pick-and-roll player, but no one has seen that unless they saw him in high school,” explained Torres. “Individually, 1-on-1, he’s a monster. He’s been playing against pros since he was 14. He’s been going against elite NBA defenders like Klay Thompson, Solmon Hill, Landry Fields.”

Moving forward, Johnson has an interesting month ahead of him to separate himself from the pack of wings that are all grouped in the Lottery. Fellow one-and-done players Kelly Oubre and Justise Winslow fall in the same range, as does Croatian wing Mario Hezonja, who is balling in Spain right now. While his range is likely somewhere between five and ten right now, Torres feels that whatever team gets Stanley Johnson is going to be getting a very valuable asset, on and off the court.

“He’s an amazing, cultured kid. He sees different sides to every person he’s around. That’s the type of kid you’re working with. He’s kind of a smart-ass and if you don’t know him, you think ‘Who is this kid?’ Don’t get it twisted though, has a unique ability to turn it on like no one I’ve ever seen.”