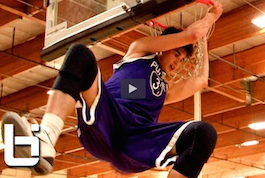 You might remember a couple of years ago there was video surfacing around the web of a teenager in the Philippines that had apparently “dunked on” LeBron James at a Nike promotional event in Manila. Although he didn’t quite dunk on the king, more like by him, he became an instant star in his home country and now looks to do the same in the United States after recently moving to Los Angeles. Kobe Paras, who was named after Lakers star Kobe Bryant, recently moved to Cali and is now hooping at Cathedral HS in downtown LA while reportedly living with a host family. Despite only being a junior, the 6-6 forward has already accepted a scholarship offer to UCLA. Looks like there might be a new Kobe that will soon dominate the basketball chatter in LA.