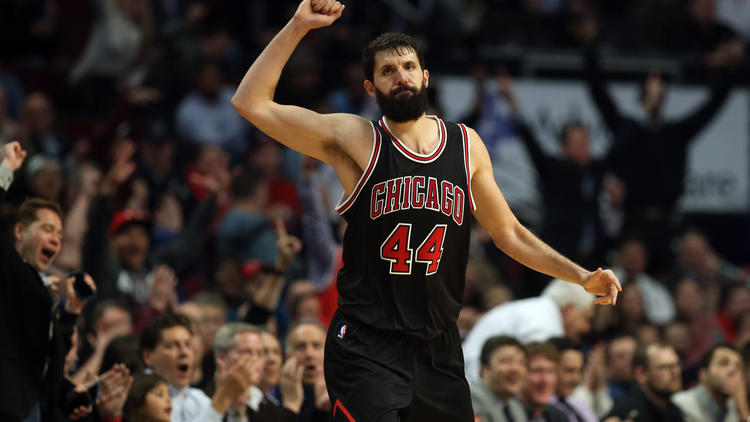 Off a feed from Pau Gasol, Nikola Mirotic punched a jam in Jason Maxiell’s grill Monday night in the Chicago Bulls’ 98-86 win against the visiting Charlotte Hornets.

The victory clinched a Playoff seed for Da Bulls, and Mirotic scored 14 of his team-high 28 points in the final stanza.

Jimmy Butler rejoined the lineup following an 11-game absence due to a left elbow injury, scoring 19 points and grabbing nine rebounds in 39 minutes of action.

With two answers, one short and one strong, Joakim Noah summarized the state of the Bulls, who clinched their seventh straight playoff berth Monday with a 98-86 victory over the Hornets. […] “No,” Noah said, when asked if the Bulls’ defense is where it needs to be.

Expanding on why, Noah cited a need for more toughness. And then he dropped the kicker. […] “I still think we’re the toughest team to beat in a seven-game series,” he said.

The game also featured another strong finish from Nikola Mirotic, who scored 14 of his 28 points in the fourth quarter. […] “Dude can play,” Butler said. “He has basically carried us this month.”