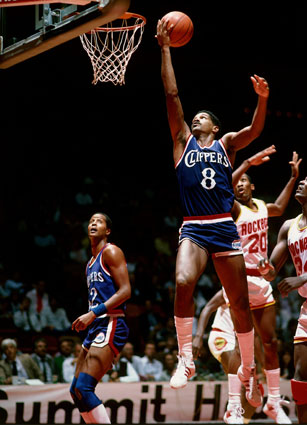 Inspired by the re-release of the classic adidas Top Ten, we hooked up with one of the shoe’s original endorsers, Marques Johnson, in his proverbial backyard of Ladera Park in Los Angeles. Peep what he had to say, and then read a little about the man.—Ed.

What does that really mean? With the infiltration of the Internet and social media, time has shifted and made something as recent as last year…old school. When used correctly, though, the term can still perfectly describe the nostalgia one feels when looking back at true dopeness. Such is the case with 58-year-old NBA legend Marques Johnson, whose Twitter handle just happens to be @olskool888. Poetic justice.

Back in the ’70s, the native of Natchitoches, LA, whose fam had moved to South Central L.A., could be found hooping it up for the Crenshaw High Cougars. Today, 40 years later, Johnson is standing on the courts at nearby Ladera Park. Looking nowhere near his age and rocking crisp blue adidas Top Tens, Johnson takes a moment to soak in the childhood locale. “This is where I learned my craft. Lots of hard knocks,” Johnson says with a smirk.

Playing hard is the name of the game when your family name is synonymous with basketball. Johnson was groomed to be a star by his dad, who coached him in school and gave him a love for bball. “I wasn’t for want with my dad,” says Johnson. “If anything, he was around too much.”

Johnson has no complaints, though, as the family time in the gym led to a UCLA scholarship. “We just finished watching UCLA win the ’73 NCAA Championship and the phone rang,” remembers Johnson. “Coach Wooden was on the other end still in the locker room after the Bruins win. He says, ‘Hello, Marques? It’s Coach Wooden. We’d like for you to be a part of this next year.’ He knew how to close the deal [laughs].”

Johnson had some deal-closing skills of his own. In his sophomore year, as a star 6-7 forward, Johnson got Coach Wooden his 10th and final NCAA title. “For me, playing for Coach Wooden was one of the greatest experiences of my basketball life,” says Johnson.

Part of what made Marques so dope is that he looked so good while making history on the court. Having first been introduced to adidas by his coach at Crenshaw, Johnson reveled in the product he got in Westwood. “I was into my look,” he remembers. “And we were an adidas school, and I got all the adidas I wanted. That was like being in heaven.”

After contemplating leaving school early for the NBA but deciding against it, Johnson picked up the first-ever John R. Wooden Award for Excellence as well as his BA in Theater Arts. Once his academics were squared away, the bright lights of the NBA greeted him.

In 1977, Johnson went third overall in the NBA Draft to the Don Nelson-led Milwaukee Bucks. Nellie quickly took Johnson under his wing. “It was a huge blessing because Don Nelson used the Red Auerbach system he’d learned as a player in Boston,” says Johnson. “My rookie year was kismet.”

Marques’ Bucks teams were always rock solid, but they couldn’t get over the hump of great squads like the Larry Bird-lead Celtics and the Dr. J-helmed Sixers.

Competitively, Johnson’s pride wouldn’t let him feel defeat, regardless of the personal accolades (First-Team All-Rookie, etc). He constantly worked on his shot, which helped him average 20 ppg through 12 years in the L. It all helped him shine as the business of basketball started to see how influential the “cool” ballers were.

Enter adidas, which saw 10 players deserving of representing a new model called the Top Ten just for all the sneaker lovers that played the game and the corner. “They were taking 10 of the top NBA guys and putting them in this new, revolutionary shoe,” Johnson explains. “Myself, Adrian Dantley, Billy Knight, Mitch Kupchak, Bob Lanier and some other guys. Once we heard about that deal, it made us feel special. It was a separator, you know? Like, ‘You’re the Top Ten.’ It was a great concept.”

The NBA was expanding its reach in popularity as jerseys and kicks were becoming coveted lifestyle gear, and adidas played it up and became woven into the culture’s fabric. “In those days I played summer ball at UCLA, and when I broke out my Top Tens the first time, people’s minds were blown. It was the first shoe that gave a different appearance to a basketball shoe,” Johnson says. “The guys I ran with at UCLA were totally enamored with it, like, ‘Where can I get those? Can you get me a pair?’”

Johnson was a stylish and successful baller right up until a freak neck injury suffered in December ’86 effectively ended his career. Coming to terms that his career was over gave the 30-year-old time to reflect and get his life together after a bout with substance abuse, a string of close family deaths and years of NBA rigors that could break the most solid of men. Once healthy, repairing fractured family relationships and finding himself, Johnson was able to clearly support his own sons who followed in the family business. One, Kris Johnson, attended UCLA and wore his pop’s now-retired No. 54 while winning a title under Coach Jim Harrick.

These days, you’ll spot the energetic, broad smiling and spirited Johnson on Fox Sports as an analys. You’ll also find him on YouTube every year around February, trying to see if he still has the hops by dunking on a regulation rim, as a birthday gift to himself. “I come out and see if I can do it. It was tough last year, but when I do it, it’s a pride thing.”

It’s his way of keeping it old school.