Owner Mikhail Prokhorov Made the Nets Do His Strange Workouts 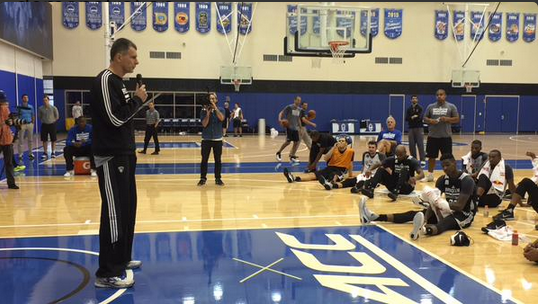 Mikhail Prokhorov is a tall, fit and very rich Russian man who happens to own an NBA team.

The quirky billionaire surprised the Brooklyn Nets at their training camp Wednesday by demonstrating his workout techniques—an unusual mix of martial arts, volleyballs, tennis balls, boards and sticks—then asked the players to join in.

#Nets Owner Mikhail Prokhorov at Training Camp today to give the team a demonstration. pic.twitter.com/oyApQJ0eJ6

A sampling of Tescao drills demonstrated by #Nets owner Mikhail Prokhorov with the team. pic.twitter.com/WPZ4soEGuf

Another look at the #Nets working with owner Mikhail Prokhorov today at Training Camp! pic.twitter.com/T4iW0VGuox

The Nets knew Mikhail Prokhorov was coming to practice Wednesday at Duke University. […] They didn’t know the owner would be putting them through a workout.

“I think my preference was to come personally, and to say hello to the players and to the coaches,” said Prokhorov, who was making his first stateside visit to training camp since buying the team in May 2010. “I think it’s very important for the new team to have special team building, and of course the commitment of ownership as part of the team. But I also wanted to share with them my own experience with martial arts, and I really will be happy if it helps them in some way.”

Some of the more peculiar exercises during the half-hour session: doing push-ups while balancing on four volleyballs, doing push-ups on a volleyball with a stick, and bouncing a volleyball off the floor with one hand while bouncing a tennis ball on a board with the other. […] “That was cool,” Jarrett Jack said. “It was my first time meeting him in person, but for him to come out and show he’s a guy that actually tries to better himself, health-wise, that’s pretty cool. He’s works in a different realm, definitely, than we usually do. It was clear to see that it looks like it’s easy, but it definitely isn’t. It’s clear he’s put some time in, and he’s competitive, too.”