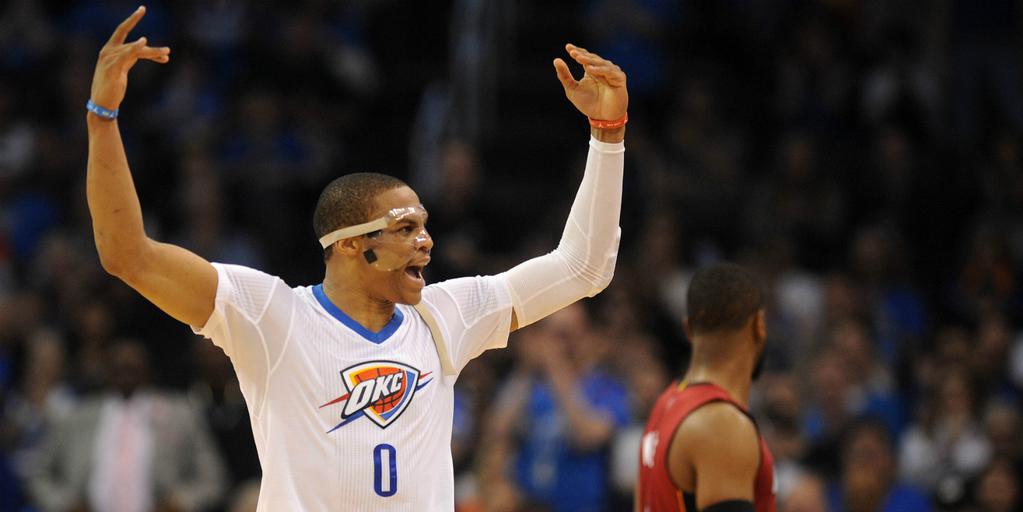 UPDATE: The L announced Monday that one of Russell Westbrook’s rebounds shouldn’t have been credited to the OKC Thunder guard, thus, no triple-double. Haters:

Russell Westbrook's triple-double from last night has been revoked, it would have been Westbrook's 10th of the season.

The NBA’s triple-double king was back at it Sunday, getting the 10th of his remarkable season as he finished with 12 points, 10 rebounds and 17 assists for his second consecutive triple-dip.

In addition to Westbrook’s heroics, the OKC Thunder relied on defense to earn an impressive 93-75 win against the visiting Miami Heat.

It was the first time since Jan.31 that OKC didn’t break the 100-point barrier.

It was only the second time in the past 13 games that the Thunder held an opponent under 100 points. In the previous 12 games before Sunday, the Thunder had yielded 111.2 points per game, a crazy number that caused major concerns to creep in about this wounded but gritty team.

More impressive is how the Thunder assembled Sunday’s performance without injured forward Serge Ibaka, the team’s best interior defender who is sidelined after knee surgery, and starting shooting guard Andre Roberson, the perimeter pest who sprained his left ankle 90 seconds into the game and did not return. […] “We played great defense throughout the whole game,” said forward Kyle Singler, “and it was good to see because we needed a good defensive performance.”

Thunder coach Scott Brooks pointed to last Friday’s fourth quarter against Atlanta as a catalyst for what we saw Sunday. In that final frame the Thunder held the Hawks to 20 points on 8-for-23 shooting (34.8 percent). Against the Heat, the Thunder gave up just 17 fourth-quarter points — only nine in the first 61/2 minutes of the period — and turned an eight-point lead at the start of the frame into an 18-point rout. […] The Thunder hounded the Heat into 39.5 percent shooting, only the second time this month that OKC has held an opponent under 40 percent shooting, and made Miami miss 15 of 18 3-point tries. Led by Steven Adams, Mitch McGary and Enes Kanter, who returned from a one-game absence caused by a sprained ankle, the Thunder pounded the Heat inside and finished with a 52-40 rebounding advantage.