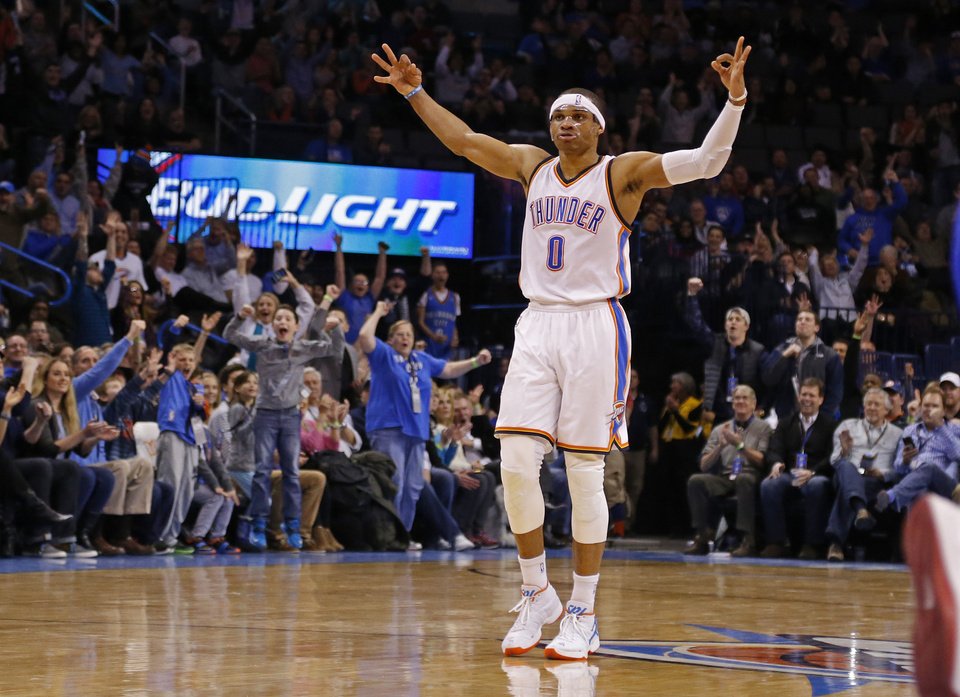 As promised, The Masked Avenger made his return Wednesday night — Russell Westbrook detonated for his fourth consecutive triple-double, pulverizing the visiting Philadelphia Sixers to the tune of 49 points, 16 rebounds and 10 assists.

Five of Russell Westbrook's nine career 40-point games have come in the past 35 days. On some type of binge right now.

Westbrook’s latest masterpiece gave the OKC Thunder a 123-118 overtime win, their second in a row.

Oh, and Russ is now the NBA’s leading scorer.

This time, it was that Westbrook did all that just four days after undergoing surgery to repair a fractured right cheekbone. Five days ago, the man had a dent the size of a nickel in his face. On Wednesday, had it not been for the protective mask Westbrook wore — a conventional clear one much to the chagrin of many — you wouldn’t have known anything was wrong. […] “For those of you, including myself who thought Russell might need a couple of games to get used to a mask, we were wrong,” Thunder coach Scott Brooks said to start his postgame press conference. “He was all over the floor.”

Westbrook became the first player since Michael Jordan in 1989 to register four straight triple-doubles. Wilt Chamberlain, Oscar Robertson, Magic Johnson and Maurice Stokes are the only other players in NBA history to record four straight triple-doubles. […] “He’s playing incredible,” said Thunder forward Nick Collison. “We don’t want to take it for granted. But we expect him to play well. We know what he’s capable of. He’s just so engaged and he’s so into the game. He’s competing in every phase so the numbers come with that. But he’s in a great rhythm right now and he’s got a great approach to the game. He’s coming in ready to play each night. And we need it.”

The mask, Westbrook said, was noticeable but not a hindrance. […] “It was OK,” Westbrook said. “It was weird, obviously. Keep wiping it and it was a total big process of trying to keep everything from not fogging up. But it’s not going to stop me. My job is to come out there and lead my team.”