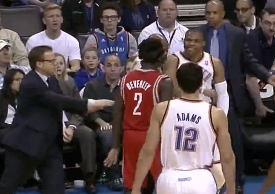 Russell Westbrook lost his cool when Patrick Beverley tried the same stunt that led to season-ending knee surgery last year. Yes, things got a bit testy between the Houston Rockets and OKC Thunder on Tuesday night. Per the Oklahoman:

Reggie Jackson, maybe as a bit of retribution, pulled the same sideline move on James Harden a bit later. Harden took exception, with a little shove, and the two benches continued to chirp at each other.

“Talked to James a little bit after (the game),” Jackson said. “Just something that happened. … That’s what I’ll go with.”

Then later, following a made shot under the Rockets’ hoop, Steven Adams nailed Harden with a forearm under the chin. Harden went down in a flash, maybe exaggerating the contact a bit. Then he rushed to his feet and sprinted into the face of the Thunder rookie.

As this latest skirmish was going on, Scott Brooks made his way over to the fray, chirping at Harden and the officials.

“My mom wouldn’t be proud of me for what I said,” Brooks admitted postgame.

Harden was then seen yelling back at his old coach, saying, “I ain’t flopping,” before wandering over for an animated conversation with some courtside fans during the review.

“Nothing,” he said with his best poker face. “Just win the game. That’s what my whole objective is … win the game.”

“He’s about playing the right way,” the Thunder coach said. “He’s about playing a game that we as a coaching staff, as fans, as an organization can be proud of. That’s what he does every single night; he just plays the way it’s supposed to be played.”