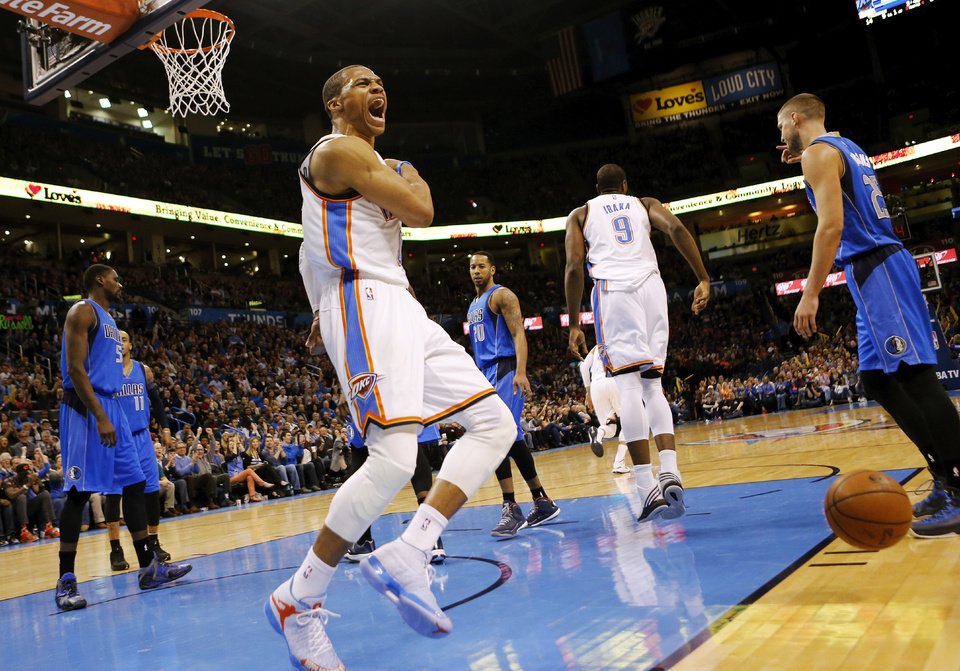 The OKC Thunder managed to shake off an absolutely wild trade deadline Thursday, and pounded the visiting Dallas Mavericks 104-89.

Russell Westbrook led the way with a game-high 34 points, and handed out 10 dimes.

Serge Ibaka was also spectacular, as he registered 21 points and a career-high 22 rebounds (the first 20-20 game in the Oklahoma City era.)

The victory pushed the Thunder into a tie with the Phoenix Suns for the eighth and final Playoff spot in the Western Conference.

“(Ibaka) was huge,” Kevin Durant said. “I didn’t even know he was rebounding that well until I looked up and he had 16 at the end of the third. He was everywhere.”

On a night where the Thunder could’ve struggled with a lack of energy, sapped by the loss of locker room leader Kendrick Perkins, and a lack of rhythm, because of the eight-day All-Star break layoff, OKC lacked neither. Dallas, back at near full strength, did. And the Thunder pounced, punctuated by Russell Westbrook’s 34 points and 10 assists, but led by Ibaka.

In the coming days, with (Steven) Adams a couple weeks away from a return and Enes Kanter expected to arrive on Friday, the Thunder’s crop of big men will replenish. Ibaka will primarily slide back into that power forward role. He won’t have as big a rebounding burden. His spacing will again hold greater importance.