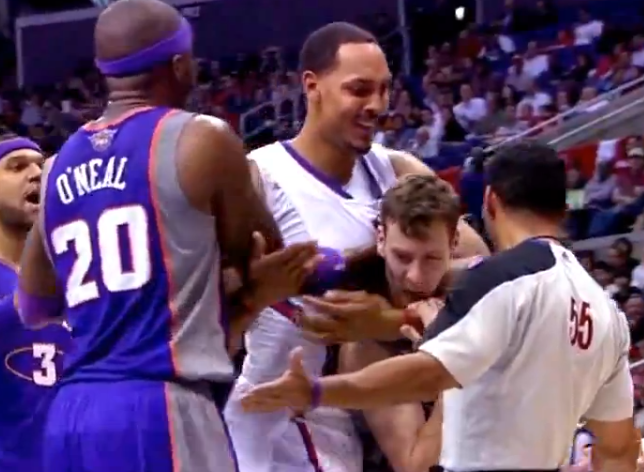 In the fourth quarter of the LA Clippers’ 126-101 blowout win over the visiting Phoenix Suns, Ryan Hollins and Goran Dragic got tangled up beneath the hoop, and Hollins then put Dragic in a long headlock. Both Hollins and Michael Beasley were ejected following a mini-skirmish. Per the AZ Republic: “The Suns showed fight in the 126-101 blowout loss at Staples Center but not until they trailed by 26 points with nine minutes remaining in their seventh consecutive loss. Earlier in the game, P.J. Tucker pushed Blake Griffin away from standing straddled over Goran Dragic but the Suns showed little resilience in letting a close game unravel in a third quarter of Clippers playground moves. On a simple inbound after a Clippers basket, Dragic put his body into Clippers 7-foot, 240-pound center Ryan Hollins’ body to get position on his press. Hollins put his left arm across Dragic’s chest and neck, pushing Dragic back. Suns center Jermaine O’Neal stepped in but the Clippers’ Hollins dragged Dragic toward the Suns bench. Suns forward Michael Beasley, who was in the game, pushed Hollins away and teammate Jared Dudley separated those two. After a video review, Hollins was assessed a Flagrant Foul 1 and ejected and Beasley was ejected. ‘He choked Gogi,’ Beasley said of Hollins’ foul on Dragic. ‘These guys in this locker room are my family. They’re my brothers. You’re not going to choke my brother and sit there and smile about it. I feel like the only reason he did that was because it was Gogi. He’s bigger than Gogi. I’d do it a million times. I’d do it for anyone in this locker room. That’s not right to do anybody. You want to pick on somebody. I got a 7-footer to my right (O’Neal) that likes that kind of stuff. Don’t pick on our smallest guys and then to put him in a headlock and hold it for five minutes? I just wanted to get him off Gogi and he threw his fists up at me. That’s when the situation got heated.'”