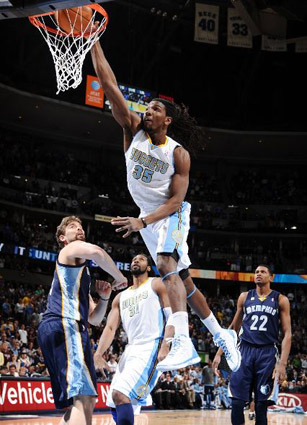 Yesterday, eight games and countless players brought us a solid night of hoops. Although the majority of the basketball world was fixated on NCAA conference tournaments and the subsequent Selection Show, dudes in the pro ranks were nothing to sneeze at, either. Between Kobe and CP3’s masks, and Rajon Rondo’s illegally-tinted glasses (they were “the wrong shade of shades,” as Jeff Van Gundy cleverly remarked), we had a lot to look forward to… just kidding. From Los Angeles’ dispatching of Boston to Kenneth Faried‘s monster plays on both ends of the court (Wait, how real is Faried? The rook is averaging 8.6 and 6.7 in under 20 minutes per, and it seem like he makes Top Plays at least three times a week. Seriously, how real is he? Is he merely a high energy, hustle-and-glue guy or is there something more? Would love to know the answer to this.) to All-Star Dwight Howard (30-13-5-4-1) abusing “All-Star” Roy Hibbert (10-2-0-2), the Association produced a number of worthy highlights. We’ve got seven more games tonight, including Knicks-Bulls and Celtics-Clippers, but before you move ahead, take a look back at Sunday’s 35 best plays.