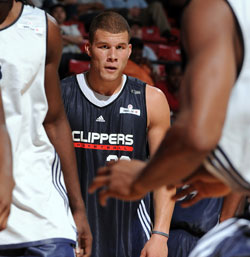 Funny things happen at funny times. This dunk was supposed to be on Hasheem Thabeet — the No. 1 should’ve pounded this on No. 2, metaphorically putting the Draft’s first runner up in his place. Well, it was Thabeet’s relief, Hamed Haddadi, who took the punishment. Why didn’t fate have its cruel way, you ask? If you haven’t heard by now, Thabeet’s summer league was pretty much… abysmal. In the words of a SLAM reporter who witnessed this dunk live in Las Vegas, “It was an awful performance by the best center in this year’s draft.”

What’s funniest, though, are the numbers. Haddadi played 10 minutes and swatted 3 shots. Thabeet played 30 minutes, committed 7 fouls, 5 turnovers and swiped at nothing but wind. When Thabeet was in, it wasn’t pretty. When he was out, it got even nastier. Thanks Blake, for showing everyone who’s No. 1.