Slamadaday: Will Coleman on Andrew Boland 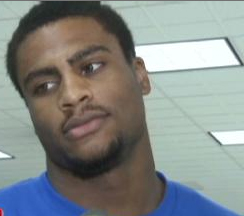 Meet Will Coleman, a 6-9, 260-pound sophomore with a 40+-inch vertical leap. If this clip already has you feigning for more of the JuCo star sophomore from Columbus, Ga., don’t fret–he’ll be unleashing these athletic dunks for John Calipari at the University of Memphis next year.

Coleman plays for one of the top junior colleges in Florida, Miami Dade (20-2, 6-0 conference), and was the target of bevy of high-major universities this summer–Pitt, UConn, Missouri, Tennessee, Clemson, Minnesota, UNLV and Kentucky–before he made a verbal commitment to play for the Tigers on Aug. 14.

Despite not playing organized ball until his junior year at Glennwood HS, where he was state champion in the 100-and 200-meter dashes, Coleman originally signed with Arkansas-Little Rock. Instead, Coleman went the junior college route because of academics. At the time, he weighed (just!) 220 pounds and has since beefed up with 40 pounds (most accounts actually report 50 pounds) of sinew. Coleman appears to be a classic late-bloomer whose coach shielded him from recruiters.

Says Head Coach Matt Eisele: “He’s a freak of nature. He was an unknown in high school because he lived out in the country in Georgia and didn’t really play AAU ball. But now he may be the best junior college big man in the country. And on top of that, he is the nicest kid I ever coached. He also has a 3.0 GPA.”

Coleman is on pace to graduate and join the Tigers in the summer. He’s bigger than current-Rocket Joey Dorsey, and comparisons are already abounding among the Tiger faithful.

Memphis coaches have a track record of developing bigs. Coleman has all the physical pieces, and Coach Cal and staff could transform Coleman into an NBA Draft pick with his remaining two years of eligibility.

Oh, and a personal/fun fact from Coleman’s team profile: Likes The Carebears. Yes, he’ll fit right in at Memphis.