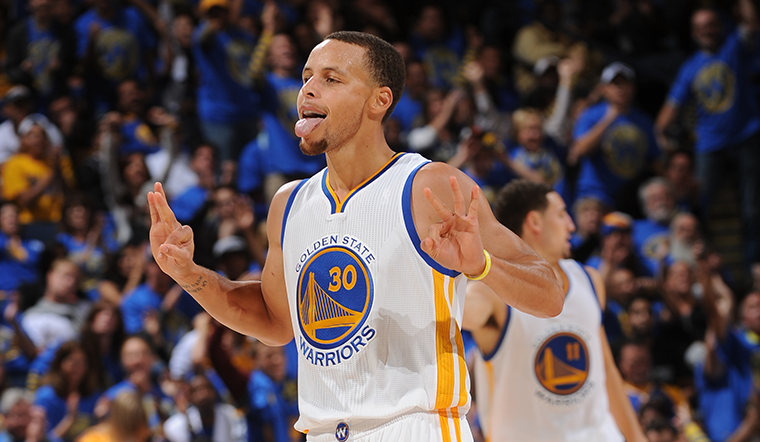 Move over Stephen Curry … for yourself: the Golden State Warriors superstar guard erupted for 45 points and 10 assists Thursday night in a 116-105 win against the visiting Portland Trail Blazers, and for good measure, broke his own record for the most three-pointers made in a season.

Curry now owns three of the five all-time best seasons from beyond the arc in NBA history.

.@StephenCurry30 has 3 of the 5 most prolific 3-Point shooting seasons in NBA history. pic.twitter.com/A2NClr6m0c

The Dubs’ victory secured the top overall record in the L.

With tonight's win, the #Warriors have officially clinched the best record in the @NBA. #DubNation pic.twitter.com/OnyOeGEqeC

Head coach Steve Kerr said that Curry’s brilliant performance was the latest indication that he badly wants the MVP.

The Warriors have decided not to campaign publicly for Stephen Curry as MVP, but it’s not too late. […] Seemingly, all they would have to do is send the voters video of the final 123 seconds of Thursday night’s game, when the point guard poured in 10 points and turned a 104-103 nail-biter against Portland into a 116-105 Warriors walkover in front of a national TV audience and the 120th consecutive sellout crowd at Oracle Arena.

On a night when he made eight three-pointers to pass the NBA single-season record, Curry scored 19 of his 45 points in the fourth quarter and added 10 assists in the game, just for good measure. […] He ran his season total for threes to 276, breaking his own mark of 272 — set in 2012-13 — in the first half. But Curry made his most important shots down the stretch. With the Warriors clinging to a 104-103 lead, Curry made his only three free throws of the game to give his squad a chance to exhale.

“He never talks about being MVP,” Kerr said. “He never says anything about it, but you better believe that he wants it.” […] “This is special,” Curry said. “I wanted to be healthy and play as many games as I can at a high level, and obviously, I like to shoot the ball. To break a record that I already had is pretty special.”