Stephen Curry Lights Out in Game 5 Win vs Grizzlies (VIDEO) 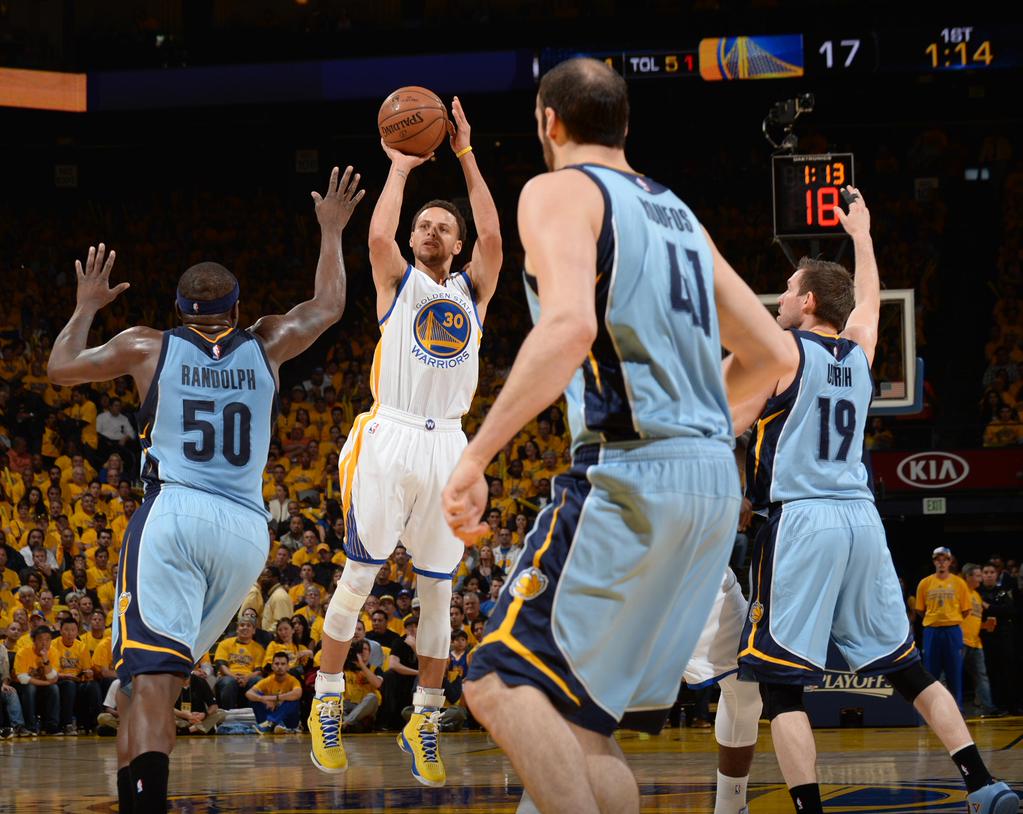 The Golden State Warriors pushed the Memphis Grizzlies to the brink of elimination Wednesday night, taking down the visitors in a 98-78 Game 5 romp.

Stephen Curry became the first player in League history to hit six threes to go along with six steals in a postseason game—the MVP finished with 18 points, seven rebounds and five dimes.

Stephen Curry becomes the first player to make 6 threes and have 6 steals in a Playoff game. pic.twitter.com/Fgpvl8vX9F

In addition to the long-range bombing, the Dubs also rode their defense, stifling the Grizzlies (who were without Tony Allen) and taking a 3-2 series lead.

After the first quarter, the Warriors shut down the Grizzlies. In the second and third quarters combined, Memphis totaled 32 points on 31.1 percent shooting. The Grizzlies looked helpless. They couldn’t buy a bucket if Floyd “Money” Mayweather Jr. was paying. And he might’ve wanted to help the Grizzlies the way Warriors fans booed him in his courtside seat Wednesday. […] The Warriors head to Game 6 in Memphis on Friday with a chance to close out the series because the defense has turned the tide of the series. But this was the reality all along. Memphis bottled up the Warriors in Games 2 and 3. But as long as the Warriors score 100 points, the Grizzlies can’t win.

After Game 4, Memphis coach Dave Joerger concluded his team would have to score 100 points at some point. But if the Warriors are defending like they did in Game 5, he can forget about it. […] “I think I said the first couple of games our defense was good enough,” Steve Kerr noted after his team held Memphis to 1.6 points per minute. “I was wrong. It wasn’t good enough. This is what it’s going to take, this kind of defense.”

The Warriors’ plan, which began in Game 3, is three-fold. First, and it’s key, is ball pressure from the guards. Klay Thompson switched over to Mike Conley, and the Memphis point guard hasn’t been the same since. But also, Shaun Livingston and Stephen Curry are ballhawking aggressively, taking a page from the Grizzlies. […] The second component: the Warriors are doubling, or at least aggressively helping, when (Zach) Randolph and Marc Gasol get the ball inside. Draymond Green and Harrison Barnes — along with David Lee off the bench — are working to stay in front of Gasol and Randolph in the post. Even when the Grizzlies’ bigs do get the ball, they aren’t nearly as deep thanks to the Warriors’ forwards holding their ground.