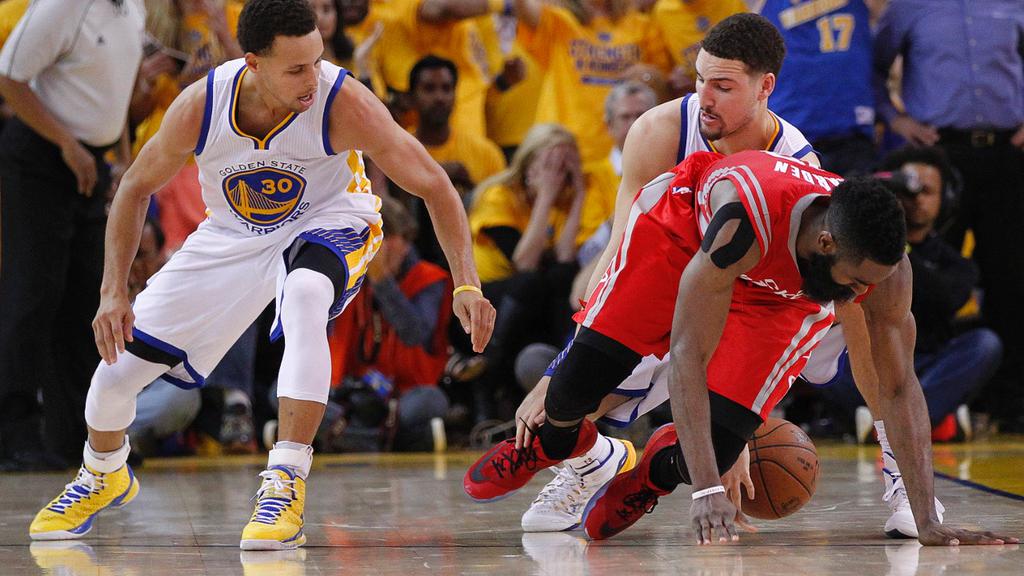 Despite yet another brilliant night from James Harden—38 points on 13-of-21 shooting, 10 rebounds and 9 assists in 41 minutes of work—Stephen Curry and the Golden State Warriors hung on 99-98 Thursday, and pushed the Houston Rockets into a 2-0 hole in the Western Conference Finals.

The MVP was brilliant, scoring 33 points and handing out six assists, and helped cause a last-second Harden turnover to seal matters in Game 2.

Harden and the Rockets are frustrated …

… but he says that they remain confident heading back to Houston for games 3 and 4.

James Harden: "We had plenty of opportunities to win both games, so we have all the confidence in the world."

“Sometimes I want to crack open a beer and get a courtside seat,” Warriors center Andrew Bogut said of the Curry-Harden fireworks. “Because these two guys, they’re the two best basketball players in the world. […] Steph knocks down a big shot and then we’ve got to come down and try to stop James, and he knocks down a big shot. … A lot of times I get caught watching, going crazy with the shots that he makes. It’s an honor to be his teammate.”

Almost every time down the floor, the ball was in Curry’s hands and he’d get a score, and then it was in Harden’s hands, and he’d score, and then repeat, repeat, repeat. Curry’s exclamation point came when he dribbled out the 24-second clock by himself, got Houston forward Terrence Jones guarding him in a switch, then made a fall-away jumper at the buzzer to give the Warriors a 98-90 lead with 1:39 left. […] “Look, the shot he made over Terrence late, we’re going to have to live with some of those,” Houston coach Kevin McHale said of Curry. “And then we’re going to have to make him drive and try to shoot over our bigs. But the guy is a tough handle. … He does make you pay when you make mistakes. That’s why Steph is a very good player.”

It wasn’t over until Harden — who scored 12 fourth-quarter points — had the ball with the game clock expiring, with Klay Thompson in front of him and Curry hovering near, and then Harden had the ball knocked loose and couldn’t recover as time expired. Did Curry feel like this was a duel to the end? […] “A little bit, because they’re obviously back and forth, nobody was getting a stop, and it was kind of high”‘octane offense,” Curry said. “He’s been playing well, and we’ve been throwing a lot of things at him. He’s just making some tough shots and staying aggressive. So we’ve just got to stick to the program and hopefully wear him down and wear on him. But in the middle of the game you notice it, but obviously we’re trying to get a win, so you want to do whatever you can to make that happen.”