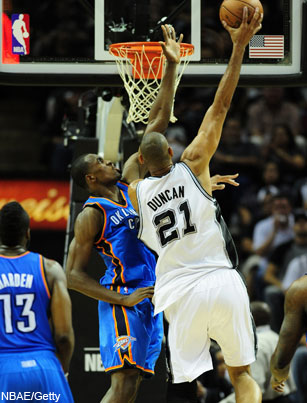 Last night, when the final buzzer sounded and American Airlines Arena began to drown in a sea of confetti and champaign, the Miami Heat were officially crowned ‘11-12 NBA Champions. Just like that, the lockout-shortened season was over. Next up is the Draft, then free agency and Summer League, and then we do it all again. But before we send away the amazing season that was, it’s only right to relive the best moments from the incredible postseason that commenced eight weeks ago. Above are the Top 30 plays of the 2012 Playoffs, containing everything from Heat-Thunder clips to vintage Kobe Bryant and Tim Duncan to highlights of the Grizzlies and Knicks. Enjoy.