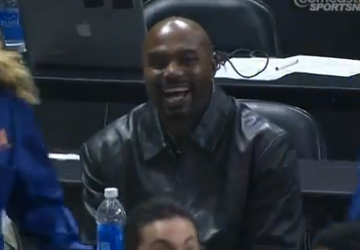 With his pops in the stands, Tim Hardaway Jr. hit the game-winning bucket, as the New York Knicks took down the Boston Celtics. Great moment. Per the NY Post: “Tim Hardaway Jr. didn’t need to win the game with 8.2 seconds left with a 17-foot, left-baseline jumper to give the Knicks a 103-102 preseason win over the Celtics last night. Hardaway had already proved plenty in the first 3 ½ quarters, that he wasn’t like most rookies, that ice runs through his veins, part of the gene pool. Hardaway drained five of his first six shots, including three straight 3-pointers and finished with 16 points. But with his famous father, Tim Hardaway Sr., on hand scouting for the Heat, the game-winner was the cherry on top of the sundae. Hardaway’s Knicks debut turned into a storybook tale as he floated in the jumper to repel the Celtics, who had rallied from a 23-point fourth quarter deficit against the very end of the Knicks roster. Hardaway Sr. could be seen looking up to the ceiling, howling after his son’s shot fell through. ‘It was great,’’ Hardaway Jr. said. ‘Everything you ask for and dreamed of came to reality. [My father] was out there scouting for the Heat and the same time supporting me. It was great to have a family figure out there.'”