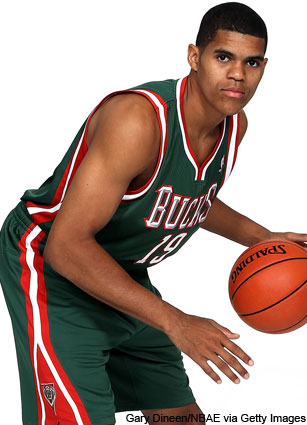 A month ago, we spent a day with Milwaukee Bucks rookie Tobias Harris at his “School Of Business” Basketball Camp in Dix Hills, NY.

A five-star recruit out of high school, Harris made his imprint on the SEC with a solid freshman campaign at the University of Tennessee, averaging 15.2 points and 7.3 rebounds. After scoring 19 of his team’s 45 points in an opening round NCAA Tournament defeat, Harris entered his name in the NBA Draft. And with the 19th pick, the Bucks selected the combo-forward.

“We’re thrilled to be able to pick Tobias Harris,” Bucks General Manager John Hammond said after the draft. “He’s an amazing guy. And young guys like that, if they can ever find their way to the floor at that age the improvement they can make is so rapid. It’s not easy to improve if you’re not playing, and you know Scott [Skiles], he’ll have to earn that, but if he can do that, his upside is just tremendous.”

Only 19 years of age, Tobias Harris is the rare package of youth, versatility and work ethic. Dubbed “Nobody’s Smiling” at the 2009 Boost Mobile Elite 24 All-Star Game, Tobias isn’t as athletic or explosive or quick as some of his fellow draftees, but his mindset and determination are rivaled by few, if any.

It’s 6:30 a.m. on this blazing August morning, and Harris is already knee-deep in a grueling workout. Sporting an orange Tennessee Volunteers t-shirt, Harris is getting up shots, running sprints and doing push-ups in the gymnasium of his alma mater, Half Hollow Hills High School West. As he takes a well-deserved water break, he glances up at the two red banners directly above him and pounds his chest. “Long Island Champs, baby.” He easily could’ve directed his attention to the Gatorade banner three inches to the right. You know, the one that reads, “Tobias Harris, 2009-10 New York Boys Basketball Player Of The Year.” He could’ve, but he didn’t.

This is his gym. After two big gulps of water from a gatorade bottle, Harris claps his hands four times and gets back to work. When his two-hour workout is complete, he begins to prepare drills for his campers. After he’s finished setting up cones and a flat rung agility-ladder, Harris runs through all the drills himself, as if he were an eager-to-learn 8th grader. What else would you expect?

In the video above, we take you through a day at the School of Business Basketball Camp. In our exclusive interview, the 19-year-old sheds light on a plethora of topics, from his preparation and mindset during the NBA lockout to his experience teaching kids and giving back to the community that raised him. Words won’t do justice, but the moving pictures and interview should provide an authentic look into one of NBA’s brightest young stars, on and off the court.

Special thanks to Taylor Fauntleroy for filming and editing.