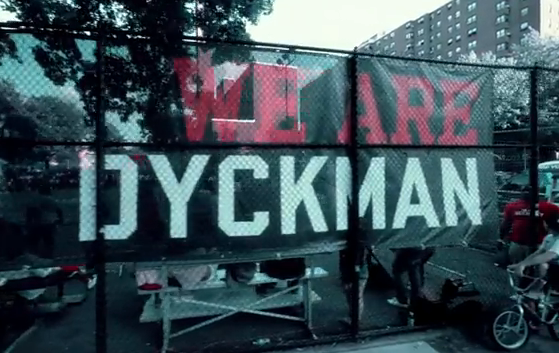 Nike Sportswear recently announced the release of a six-episode video series as part of its “Always On,” campaign, which highlights the lifestyles of select Nike athletes.  Each video is coupled with an original song from an emerging recording artist with ties to sports. These music videos highlight their diverse stories ‑ on and off-court, in and out of the studio, in all aspects of their daily lives. To kick off the series, Harlem hip-hop artist Vado took inspiration from Team Nike, the summer hoops dream team playing at NYC’s Dyckman Park this summer, to create his original track “Always On.” The track is part of a video, focusing on Team Nike players Adris “Too Hard To Guard” DeLeon and Quinton “T2” Hosley.

Team NIKE served as the inspiration for the summer anthem, and this video shows members of the squad practicing what the lyrics preach. We see how DeLeon and Hosley hold down the streets of New York City: they ride the subway, spend time with their families and, of course, get shots up in practice. At the end, we see the pair joining their teammates under the lights at Dyckman Park, the Uptown hoops mecca Team NIKE has headlined all summer. Catch Team NIKE’s sixth game next Wednesday (August 3) at Dyckman Park at 8 p.m. against 914.