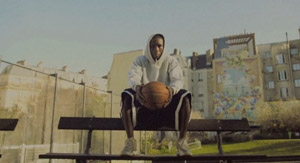 Here’s something fresh straight from Paris, France. Overseas, Nike has linked with the fashion line “Pigalle” to support France’s amateur basketball scene. We don’t know much else but here’s what we do know:

Pigalle Paris has set up the ‘Amateur Basketball’ project. The aim of which is to support basketball teams having a strong sporting and social background.

For their first initiative Pigalle Paris has chosen their local team Goutte d’Or Basket Ball, from nearby Barbès, to remake their outfits. This team which hasn’t stopped moving up in the rankings now has first class sports equipment as well as a well defined graphic identity.

Stéphane Ashpool ( Pain O chokolat / Pigalle ) who initiated the project, has collaborated with the Dutch film maker Paul Geusbroek ( Cake Film ) on a video made in Barbès which documents the unique energy of this multiracial neighbourhood.

For the initial project Pigalle Paris has has been powered by Nike Stadium Paris and Bowery Stadium.

Stay tuned to SLAMonline as we will be tracking this story and bringing you further information.