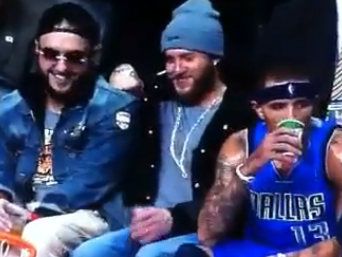 There was an amazing sight in Detroit last night, with two bearded fans sipped on their beers while seated between Vince Carter and Delonte West during the Mavericks/Pistons game.

Larry Brown Sports reports on who these two jokers are: “It turns out the fans in question are Aaron Cohen, a fashion designer who runs a clothing company called Revive, and a guy who goes by Chris Smokes on Twitter. Cohen is from the Michigan area, so we’re guessing the seats came from the Pistons, not Mark Cuban or the Mavericks. Cohen has also tweeted pictures from courtside seats in the past, but we’re guessing this is the first time he’s sat between players. It looks like they were sitting in VIP seats, not technically on the Mavs bench, but the funny part is that they were between Dallas players.”