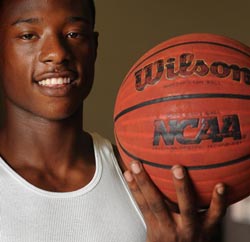 We’ve seen Chris Thomas hoop more than most, and we’re convinced he has the talent to top the Class of 2013. The rising sophomore gets to the cup with laughable ease and cans threes like he was born to make it reign. This summer, he’s buoyed himself to five-star designations and top-5 statuses in every national recruiting service’s rankings (including SLAMonline’s upcoming Fresh 10).

The Denver native is without question Colorado’s most hyped prospect since Chauncey Billups. He’s already been offered scholarships by Ohio State, Michigan State, Arizona and California, with Tennessee allegedly his current top choice. If he wants to put in the work, the sky’s the limit.