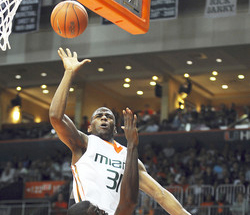 Trust us, you already know DeQuan Jones. You just may need a quick refresher. He was that kid selling jaw insurance to the nation’s No. 1 2009 recruit, John Wall, last season in an close overtime game. The video, which drew more than 63,000 views in the past year, left people wondering where the next ‘Quan Jones YouTube highlight would be.

Ranked as the nation’s 23rd-best recruit in the 2008 signing class and a consensus top-5 small forward, DeQuan may have had his coming out party Saturday night against the Tarheels.

The 18-year-old Jones easily delivered one of the sickest dunks of the season (wait for 0:30, but watch the entire video), conjuring flashbacks of Jason Richardson in the green and white. JRich and the 6-6, 220-pound freshman from Marietta, Ga. make a solid comparison—except Jones brings a lock-down defensive game and has yet to develop a solid shot from 3-point range.

Jones had a slow start to the season, but, with consistent minutes, consistent highlights will come.

Look out for this five-star recruit and Georgia 2008 Class 5A Player of the Year. Jones is ready to launch.