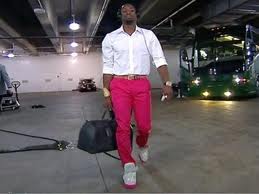 Given the way Dwyane Wade absolutely decimated the Indiana Pacers last night, he could be given a pass for wearing whatever he damn well pleases. From USA Today: “The Heat guard wore hot pink pants before Game 6, prompting NBA TV’s Rick Kamla to label his attire a ‘flagrant fashion foul.’ He also sported a matching pink finger sleeve. Wade, aware of the criticism, opened up the postgame press conference in a joking mood. ‘Start off this interview by saying I know they’re killing me in the studio over my pants,’ Wade said. ‘They’re just mad because they can’t pull it off.’ […] LeBron James made fun of Wade before the game by jabbing, ‘Damn, for real, those are close-out pants? And the finger sleeve?’ ‘You gotta coordinate,’ Wade replied. ‘You look like Eddie Murphy in the ’80s,’ James said. ‘Eddie Murphy wishes he looked like me,’ Wade said.”